Notes :
(1) One of several railtours run as a way to get to EWS Toton open weekend.

06.30 and it was time to get up and go railtouring....again! Having driven all the way to Cheltenham and back on the Saturday, on this occasion it was a reasonably easy jaunt to Potters Bar and a brief journey on WAGN to get me to Kings Cross for the start of the tour. The gen on Saturday suggested we were booked to have 60068 out and 60044 back (kind of spoils the fun knowing whats booked in advance, doesn't it?).

Time to chat with a few people and then 47726 "Manchester Airport - Progress" (or is it "Progress - Manchester Airport"?) rolled in with the stock. A 2-tone freight grey 60 was already attached. A stroll down the platform confirmed it was indeed 60068 "Charles Darwin". A few photos later and I climbed aboard to find my seat (right at the front again!).

We set off bang on time and it was soon apparent that a Class 60 is rather quiet. Even being towards the front of the front coach it was difficult to hear anything, except when we were in cuttings or tunnels! Now the one disadvantage of having a 60 up front soon became apparent - a 60mph top speed. Take it from me, London to Peterborough at speeds less than 60 takes a very long time compared to what we're used to (in my case usually 100mph with Napier power at the helm). Nothing of note to report - the outward route to Toton took us via Grantham and Nottingham before we traversed a few fiddly bits to arrive at the Toton temporary platform. Hmm, our arrival was 23 minutes early - wow, 4 hours and 18 minutes to kill before departing again. Don't get me wrong, it was easy to fill a few hours going round the open day - it's just that I did most of it on the Saturday when I arrived on Pathfinders "The Totoniser".

Right, 4 hours 10 minutes later and I was stood at the platform...but no train. A mini-farce looked about to develop as 60044 our booked loco was busy with someone elses railtour stock. A bit of quick work though soon saw "Ailsa Craig" on our train and it pulling into the platform. 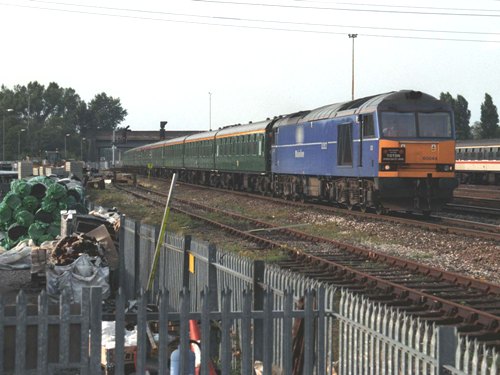 By the time we loaded we were 13 down getting away. Homeward we were routed via Loughborough and Oakham to Peterborough where we rejoined our outward route. Again, little to report, except sighting Deltics 55002 & D9016 at the back of the Brush works. So, 3 seen in one day (half the "available fleet") and the chance to see a fourth on the Monday.

Some reasonable running (sorry, can't describe it as fast) had us back close to time then missing out a planned pathing stop at Connington turned us from 2 late to 8 early. Continued good running (on the up fast too!) saw the early running increase and by Potters Bar (where I chose to abandon the train) we were 16 minutes early.

Verdict : A reasonable tour - good value for those who were sensible (i.e. not me) and only went to one day of the Toton open weekend.