Notes :
(1) One of several railtours run as a way to get to EWS Toton open weekend.
(2) Booked loco change point from 58032 to the class 47s was Washwood Heath Yard but in the event it took place in the DGL by Saltley depot.

For the Toton open Weekend I decided the only way to get there was on a railtour (saves all that mucking about with busses or trying to find somewhere to park in Derby). having already booked on Herefordshire Railtours' trip on the Sunday, a friend mentioned that the Pathfinder trip on the Saturday was booked to traverse the curve from Park Lane Jn to Water Orton West Jn. Now as this is the only through bit of track I need in the Brum area (pages 47 & 48 of Bakers Rail Atlas) it was a quick decision to part with £32.50 to get it. At least several other friends were also booked on the trip, so there would be some good company too.

Well, the tickets arrived...with news that the tour would not be covering the curve I wanted. Oh well, win some, lose some (or words to that effect).

Saturday dawned....sometime after I got up! It might not look too far on a map, but the route from Northampton to Cheltenham is not exactly built for rapid motoring. After a close shave with a milk float (miles from anywhere, I rounded a corner and it was just "there"!!) and a horse box (don't ask!) I arrived at Cheltenham station. Unusually for a (Pathfinder) railtour the train arrived a few minutes early. It was very nice to see the front and rear coaches were both newly painted in blue & grey. When the whole rake is repainted it will be a superb site (just ready for a blue Western perhaps...). 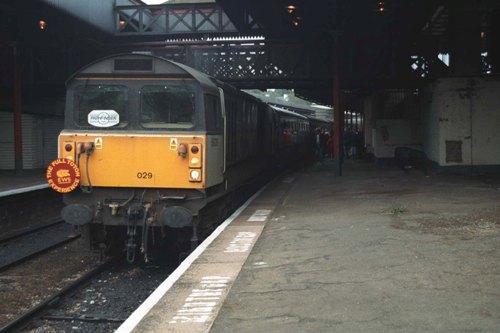 Our route was via Worcester (where the Yorkshire contingent got on) then to Bromsgrove and the attack on Lickey incline. At one stage I thought the bone was going to give up as we were getting slower and slower. Get the Lickey Bankers on! We made it to the summit then trundled through Birmingham (and past that required curve), Nuneaton and Leicester. Arrival at Toton was at 12.16, 9 minutes down.

We had just over 4 hours to explore the delights of the Toton Open Weekend. Quite easy really, as the queue to cab one of the 66's killed over half an hour!

As we waited for our stock to pull into the platform for the return leg we spotted that the Hertfordshire trip had yet to be sorted - and it had 58047 at the head (original plan was to swap HRT and PT's locos, obviously the plan had changed). Our stock was also visible with 58032 in charge. 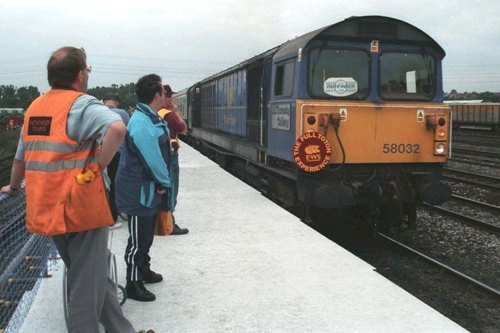 By the time the HRT trip was away, ours departed 17 down and headed for Castle Donnington, Burton on Trent and Water Orton where we rejoined our outward route (and saw that curve again). At Saltley we had a loco swap, giving up our bone in favour of spoons 200 & 363. A fast run back ensured we made Cheltenham 9 minutes ahead of plan. Just the slog back to Northampton left, but at least I had company part way - three of my colleagues wanted 47051 which was on a northbound Virgin XC working and I was passing through Banbury a few minutes before it was due. 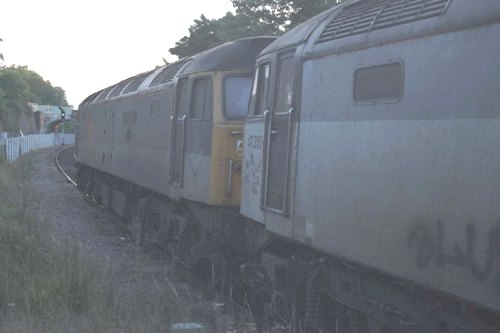 The class 47s on arrival back at Cheltenham Spa (photo: Gary Thornton)

Verdict : A decent trip - shame about missing my required curve though...