Notes :
(1) John Clifford Comments : This tour was arranged on behalf of an environmental group who wanted to show to the government that a railway already existed most of the way around London and that it would be preferable to use it instead of building more roads. Some of their plans have come to fruition in the intervening years. As I write this in 2003 I know that also some things have not changed! They advertised the tour is the railway press which is how I travelled on it. The timings advised were very limited. I was able to get the full timings for the Southern Region but not for elsewhere. 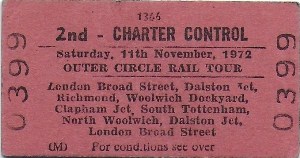