Notes :
(1) Nigel Rollings comments : This train, organised jointly by Peterborough Railway Society and the RCTS, was booked to use two three-car Class 125 diesel-hydraulic multiple units, based at Finsbury Park. Unfortunately, in the event, only five vehicles arrived - a complete three-car unit and a second one that was missing a driving motor - leading to considerable overcrowding! This was the last train, other than track recovery trains, to run between Peterborough and Oundle, on the old LNWR route to Blisworth (via Northampton), which was the first railway to arrive in Peterborough.
(2) Peter Fleming adds: This was replacement for a cancelled tour some months earlier. The original was intended to visit both Oundle and the Ramsey North branch. It was cancelled rather late in the day, probably because of concerns about the state of the track.

Source : Nigel Rollings (on the train throughout) & Kevin Driscoll 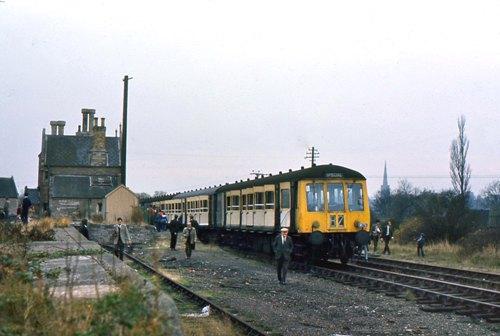