Notes :
(1) A class 37 was seen heading Eastbound over the Central Wales line, headcode 1Z45 and it is believed it is this train - if not what was that special? Also photographed the same day was 6000 entering Hereford from the south and the caption states that the journey onwards to Shrewsbury was completed by 5596 - was this another tour on the same day employing the same steam locos?
(2) John Lumby comments: This was the first post preservation railtour undertaken by 5596, its only previous main line adventure was a 4 coach test run from Guide Bridge up to Woodhead. 5596 was rostered for the Shrewsbury to Hereford (return) segment and 6000 from Hereford to Newport (return) segment. 5596 was stabled at Bulmers sidings in Hereford while waiting for the return to Shrewsbury and later ran light engine from Shrewsbury back to Dinting that evening with a case of Bulmers Pomagne safely stowed upon the tender. After the return to Dinting things get a little hazy… 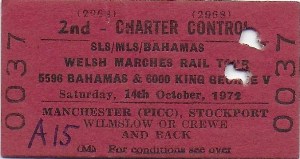