Notes :
(1) Reversed West of Platform.
(2) Was booked to visit Penrhiwfelin, (Cylla Branch), in between Cwm Bargoed and McLaren Collieries.
(3) Was booked to go via Bishton Flyover.
(4) It has been reported that D6998 was powering uphill only, Ystrad Mynach to McLaren and Bargoed South GF to Ogilvie.
(5) The tour began with two of the DMU's engines not functioning. This led to losing time on some of the heavily graded portions of the itinerary, on the climb to Taff Merthyr Colliery one engine overheated, with time lost whilst coolant was replenished, and on the 1 in 40 climb to Cwm Bargoed the DMU finally stalled over a mile short of its objective. After this stall Class 37, 6998, was summonsed from Radyr to assist. And to avoid potential difficulties in the Severn Tunnel Class 47 1923 was added as a precautionary measure for the last leg back to Bristol. A free tour "Rhymney No.2" ran on 14/10/72 for the passengers of this tour. 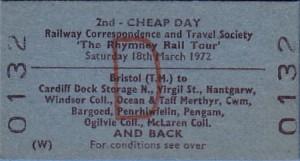 All distance figures are as on day, not as booked.
Sequence of movements are as done, not as booked, so schedule times are out of sequence.