This was tour which was run on the last day of BR's passenger operation of the Swanage branch. It also covered the Alton - Winchester Jn line which shut the following year & the connection between Southampton Tunnel Jn & Southampton Jn which shut soon afterwards. 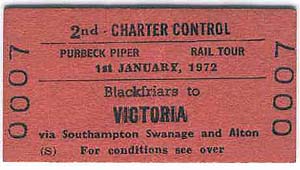