I.T.G. Railtours Ltd
Give an Inch

Notes :
(1) Letters in [ ] represent positions as shown on the track layout below.
(2) loco Propelling.
(3) Wickham Inspection Trolley (numbered 416A) was used to give rides between the "new"shed [T] and the platform headshunt [W].

From Rob Fraser: No booked times were provided, however 6 minutes is allowed between Downpatrick and King Magnus’s Halt (ref D&CDR leaflet).   Based on this I estimate 9 minutes would be allowed between Downpatrick and the site of the derailment near Inch Abbey.  It was intended to run each loco/railcar over each branch.   However, G611 was deemed unfit to make the journey on its own, and hence was paired with G613.  The Wickham Inspection Saloon was confined to shed/station limits.  It was intended to run to King Magnus’s Halt with the O&K Steam loco No.3 at the end of the day but this trip was cancelled due to lack of time.   Due to the unreliability of RB3, its trip to King Magnus’s Halt was also cancelled.   In an effort to make up time the run with G611+G613 reversed at the junction points rather than Downpatrick station between each leg.   Reversal points on the Inch Abbey branch included the River Quoile Bridge, the Level Crossing and the point at which a wagon had become derailed on Saturday 16th April 2005.  The first trip with the Wickham Saloon commenced before the arrival of E421 on its final run. 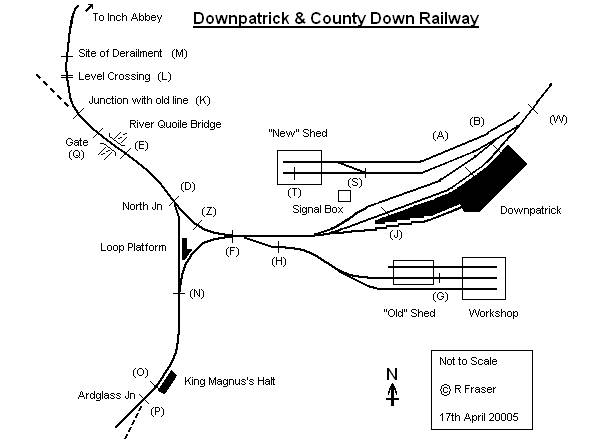 Thanks go to Rob Fraser for this "all explaining" map of the site. The letters in brackets
are as used in the traction/route detail above. Loop Platform is called Ballydugan in the 9th
edition of the Bakers bible. 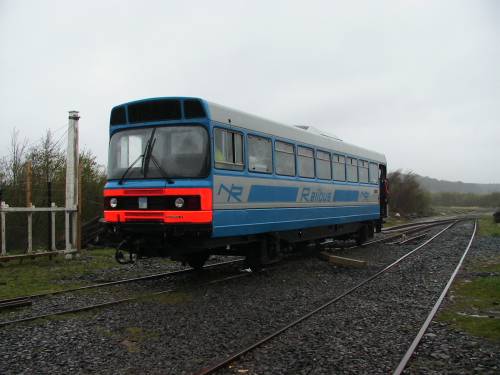 RB3 at the entrance to the main Downpatrick site. 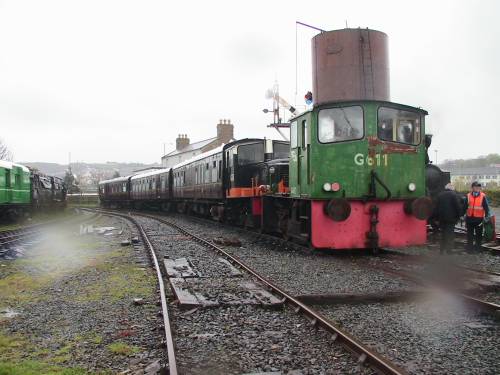 Sources : Gary Thornton & Rob Fraser (on the trains throughout)

Continued from "Beyond the Pale" tour Page.

Up at 7.30 and throw everything into my bag.  Down to breakfast which is slightly better than yesterday.  Today, joy of joys, is a 3 hour + coach ride to the North, to the Downpatrick railway.  Find a seat at the back of the coach and promptly sleep all the way to Northern Ireland – as you do (Webmaster comment: wasn't that after a panic rush back to the hotel to rescue the bottle of Glenlivet which had been forgotten about and thus nearly left as a tip for the cleaner as a thanks for coping with the aftermath of two nights on the Guinness?).  Coach driver is an Eastern European import.  Thornton thinks he knows him. He looks like a porn star – that’s where Gary obviously recognises him from. “Downpatrick please, Driver”. “Da”. “OK, that way”.

And the rain came down. And down.  And down.  Arrive at Downpatrick and it’s shut. The start proper of a surreal day.  Gates are locked and nobody has the key.  Old Escort van (the fastest thing that the Downpatrick boys have got) screeches up and the biggest bolt cutters known to man splice through the chain.  Huddle under the station canopy and the wind blows and the rain still comes down. Get on the stock.  Decide it’s warmer on the platform.  At least someone’s got the kettle on – but not yet on the front.

Walk round the shed before doing the kettle to the gates across the river bridge.  Thornton has listed all the moves in intricate detail, so I won’t repeat it all.  But – highlights involved piling onto the RB3 railbus that was completely knackered in the shed by the aide of an old chair.  RB3 blew up three times en route (I think).  Hand out scotch left over from yesterday.  Wonder if the railbus will run on it? Lithuanian coach driver offers assistance and swears at it in native tongue.  Wonder what he made of the whole experience.  Must beat a Methodist Ladies Knitting weekend jaunt.

Straight into shunter heaven for the next 2 hours or so.  A riotous ride in a completely smashed up Wickham trolley finished the day. Sight of trolley full of cranks hanging out of it is bizarre to say the least. Surprised myself by being able to leg it to McDonalds and getting back in time for the next service out.  Got wet.

Everyone back on the coach.  Sleep all the way to the airport, buy some duty free and go home.  To Birmingham and bed.

I’ll let you know when I’ve sobered up…

Webmasters footnote: Oh I do hate reviewers that answer back...

As you were Thornton…
Must take umbrage at the comments made on your scandalous web site.

1/ I was extremely knackered after a heavy week – anyone can clip a few motorway cones.  Anyway it wasn’t me who opened my car door when I was watching telly in complete comfort (granted - but isn't it a tad pompous to have a car with a TV fitted?).

2/ I didn’t see you put up much argument when I dealt out the scotch at Downpatrick – (OK, accepted - it was a nice tipple and kept out the cold very well...hic...). 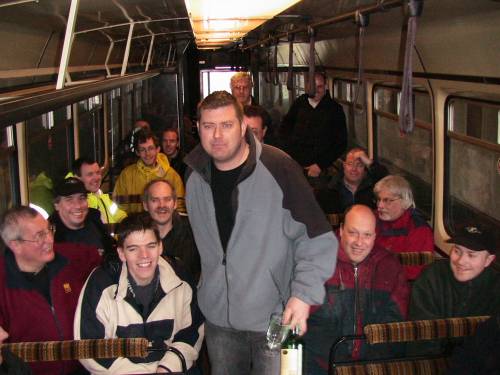 3/ I even legged it through the wind and rain to Maccy D’s to get you a burger and fries because you were bone idle.  I didn’t even argue when you tried to pay me in DSS out of date milk tokens (Yes, I must bow to your good nature and willingness to keep me supplied with junk food).

Good thing you don’t know what I stirred your coffee with….
(Oi - no need for that!)

Timings (Actual Only)
(from Rob Fraser)

Traction: Wickham 416A
(second run only)