I.T.G. Railtours Ltd
Beyond the Pale

Notes :
(1) 124 removed at Mallow due to a dragging brake problem when coupled to 162. 162 seemed worst affected but a single cab 121 class was not permitted to work with the cab at the rear so could not work alone back from Tralee, 162 being used instead.
(2) 162 Propelling.
(3) No crew available at Cork to bring the booked replacement locos (166 & 171) to Mallow.
(4) 162 failed on approach to Limerick Junction with low oil pressure. 151 was "borrowed" from the sidings at Limerick Junction and multi'd with 162 for the return to Dublin.

There was an old engine in Limerick
Which failed in a dirty great oil slick
The driver says too bad
there's another to be had
lets nick it and bugger off double quick
(courtesy: Steve Perryman - penned during the wait at Limerick Junction)

Sources : Alan Sheppard & Gary Thornton (on the train throughout)

Well, here we are again – back in the land of donkey jackets, shovels, Guinness and noisy GM power. After last October’s ‘Suir Thing’ tour, there was no way I was going to miss this GM-fest.  This time there were conditions though:

1/ I would go out for a long weekend so I could go on the Guinness.
2/ I would fly there and back – I would not be able to stand two nights back to back on the packet steamer from Holyhead and have to drive to Holyhead from the Midlands and back (Webmasters comment: wot, no playing scatter the traffic cones in the roadwork contra-flow this time?).
3/ I would fix it around work appointments so I had an excuse to charge various bits as expenses!

Plus, there was an option of doing a Sunday at Downpatrick which sounded quite good so the three days were complete.

So here goes the diary….

Meet up with Jon Cowe and Billy Bob Thornton at Birmingham Airport for the 8.15 Aer Fungus flight to Dublin.  New revelation – JC has never flown before.   Go into wind up mode (“ever know why they call the departure building ‘terminal’ Jon?”)  Buy a bottle of Glenlivet 15 year old whisky from duty free. Watch in disbelief as notebooks and cameras come out and anything with a number on is noted.  Feel urge to open whisky straight away. Take three paces to the left. I have never seen these people before in my life.  Find the strongest coffee I can.

A bit of a bumpy flight.  Lots of crosswinds on landing.  Wind Jon up even more.  Good meetings at Inchicore though.  Back to hotel to change and prepare for a run to Sligo and back.  Call boss, who is also in Dublin.  Boss sounds like Barry White on acid.  Boss had heavy night out the night before. No change there then.

Do the 13.35 Sligo and 18.00 back with knackered MkII stock.  Stock wedged.  What do they expect with only three trains a day? Large GM 074 on front.  Sounds great but looks terrible.  Makes a change – in the UK it’s usually the other way round. Decide that new stock on order can’t come quick enough. Pass time chatting to other bashers and quaffing Guinness.  Find great bar in Sligo and eat some of the best seafood I’ve ever tasted.  Worth coming out here just for the gastronomic experience.  Experience number two is 074 lifting out of Sligo on full bore and listening to the thrash all the way back to Dublin.

Back to Dublin and out on the lash in Temple Bar.  Thornton Junction cries off early.  Decide that Thornton is a lightweight. Meet Hassard Stacpoole in some sleazy battlecruiser, carry on drinking and get slung out at closing time.  Not hammered enough to do kebab move with Stacpoole.  Go back to hotel.

Wake up.  Not sure where I am.  Does my head hurt?  Decide it doesn’t and get up and undertake the three ‘S’s.  Only woke once in the night to throw something at The Cowe who was doing a very good impression of a noisy machine on notch 5. Brekky starts at 7. Full Irish Eastern European breakfast experience complete with three words of English and lashings of lethargy.  Gary – “I ordered coffee, not warm water with grit in it” Thornton is already there. At 7.01 - on the street and heading to NASA Control Heuston.  Head for real coffee.  Thornton stacks up on overpriced freshly made last week sandwiches.   Bump into Stacpoole who is still wearing the same clothes he had on last night.  He smells strongly of kebab and stale ale. Wise move not to go take-awaying on way back to hotel last night. Back at the hotel, our room is being fumigated and has been taped off by the local Garda.

GM’s 149 and 156 are rattling on the front of a rake of 5 Cravens and a generator van which is steaming nicely.  Strange that – I was doing that last night.  Seats found in coach A. Pete and Jon Wilcox are there, medals already pinned on for surviving the trip from Birmingham overnight.

7.35 – GMs open up along main line towards Cherryville Junction.  8.30 and I go off in search of a pint.  Rude not to.  Daffy and better half already seated next to the Guinness kegs. Limerick is now re-classed as being 4 pints away.  GMs doing well considering they are under powered, under maintained and under the cosh. I manage to score the curve onto the Limerick line proper at the Junction. What a Ned.

Arrival at Limerick on time. Everyone out for a photo of the two GMs.  Stampede in all directions to get shot of 124 and 162.  First 121 in the book.  Yes, seriously.  Only one to go now. Clear 50% of the class in one go! Set off for Mallow and Tralee, locos doing well.  Arrival at Mallow and there is a problem. 124 is not blowing through and the brakes on 162 are glowing.  More dragging than on a Sunday at Nuneaton. Added to that, 124 has a cracked windscreen. Off it comes. 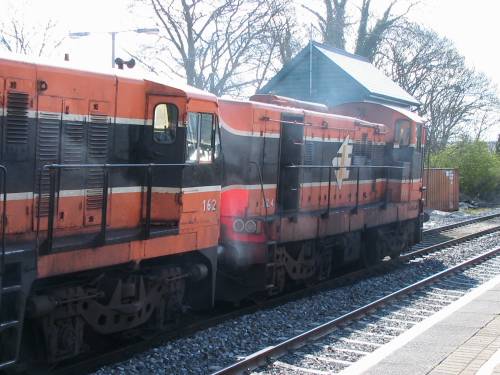 162 to Tralee.  Back to on train bar.  Engage in a Guinness and wind breaking competition with Daffy.  Daffy wins the Guinness and I win the wind-breaking.  Make mental note to see a doctor on return. 162 does well and gets there in one piece.  Everyone out for a photo.  Wait for the run round.  And wait.  And wait.  Run round eventually takes place.  Everyone back on.  Head back the way we came via a shunt into Killarney. Whoever planned that must have been hammered. 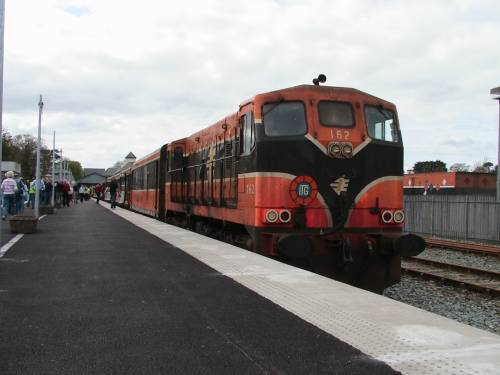 Open Glenlivet – again rude not to.  Buy two ITG glasses on the train to do the damage with.  Again, make mental note to see doctor, but enquire about a replacement liver especially for railtours.  No point in asking Thornton, he has the liver of Oliver Reed. 162 chugs back to Mallow for next loco change.  Everybody out to photograph 166 and 171 in their new transparent livery.  Transparent?  Oh, they’re not there! Both locos still at Cork as there is no driver to bring them to Mallow. 124 sits in yard engine running, but that’s about the only thing that is in Mallow on a Saturday afternoon.

162 goes it alone to Dublin.  Bets taken to whether it will make it.  A harsh stop outside Limerick Junction confirms it won’t.  Move forward slowly into station and 162 is failed with low oil pressure. Suggest it’s because of the bad maintenance.  Get laughed at. Think everyone’s being sarcastic…Heuston, we have a problem…

151 sits in yard and is prime candidate to haul us.  Sight of IE employee bouncing along platform in cart carrying a multiple working cable suggests we are going to pair the locos up.  Yes you’re right.  I wouldn’t trust one on its own, especially towing a dead one.  The driver felt the same – he had a pint with his name on it in some discreet bar in downtown Dublin and actually wanted to get there to taste it. 151 and 162 do the honours to Dublin Heuston, the sun sets, the closing credits roll and it’s the end of a good day.  Serves Stacpoole right for bailing early!

Thornton goes off with the Wilcox’s for a night in some cheap hostel.  Thornton is given a large bar of soap and told not to bend over in the showers to pick it up.  Nails, hammer and planks of wood are also suggested to barricade the door. He is also advised to sleep on his back….

Return to the hotel.  Our room has been fumigated but still stinks like a pair of armoured trousers after the Hundred Years War.  A quick scrub and out for a quiet beer.  No such thing in Dublin on a Saturday night.  Leave at closing time and stagger home.  Just follow the tram lines. Bed – and don’t hear a thing.

Go to "Give an Inch" tour Page for the continuing review...