Pathfinder Tours
The Northern Lights &
Nor' by Nor' West

Source : Gary Thornton.
(travelled on Nor' by Nor' West throughout)

Nor' by Nor' West Tour Review
(by Gary Thornton) 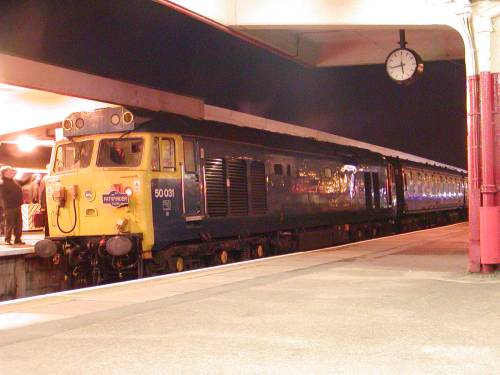 50031 at Blackpool North at the conclusion of the Nor' by Nor' West mini-tour.

My second railtour of the day! I arrived into Blackpool on Hertfordshire Rail Tours "Blackpool Illuminations (check out that Tour Review if you want) but with a "minus 3" at Blackpool my catching the Pathfinder mini-tour was not a certainty.

A rather swift move was required between trains as we arrived behind 67015 to find 60073 already on the mini-tour and about ready to go.

Safely on.....and we sat for 8 minutes before departing...oh well, so much for the rush!

The mini-tour was one of those to have suffered in the latter stages - with even the plan to traverse the Haydock branch having been abandoned after the tickets had been sent out. It was therefore a simple "out-and-back" from Blackpool to the short Hays branch in St Helens.

Found a seat (from the many to chose from) with some colleagues in first class and coughed up my £18 for a ticket. The 60 was a winner for haulage for me and I also required the Hays branch...otherwise I probably would have been enjoying (?) some tram bashing in Blackpool.

At Preston the tour ran through the station on the up goods line - after some discussion with a colleague we decided it is the "loop" line that is shown in red in the latest Baker, so some new track scored there too.

An operational stop at St Helens Central enabled at least one crank to bale ("scored the 60, I'll be home three hours earlier than planned") and another to get on. We ran onto the 1mile 11 chain long Hays branch 30 minutes late....

....and left it again 45 minutes late - and that being despite the 65 minute allowance given to cover the two and a quarter miles!

What happened was somewhat amusing but a good example of the state of today's railtour scene....we staggered on to the branch and ambled down to Ravenhead Junction (30 chains from St Helend Central and 61 from the end of the branch). Here we stopped. After a few minutes we moved about  a coach length forward then stopped again.

After a few more minutes the 60 was shut down and the crew were seen walking past to the other end of the train.

As I wanted to enjoy listening to 50031 on the way back to Blackpool myself and a couple of others started to walk back down the train. We noticed that the crew had only gone about two coaches back and were in deep discussion by the track with one of the train organisers. Someone listening to the conversation commented on why we'd only managed such a short distance down the branch - the crew had run out of point clips so we couldn't go any further.

So, with "x" many weeks prior notice (where "x" is nowadays something like 13 or even more) and yet somehow between Railtrack and EWS they can still cock-up operations on the day....wonderful! It wouldn't be so bad if it was a major reason like no track (had that happen before!) but for a simple lack of a couple of point clips...quite unbelievable!

We soon had it confirmed that the organisers were having none of it and the crew agreed (or were told) to go and get some point clips to enable us to travel further down the branch.

This they duly did and we made it further down - still not all the way but probably to within about a trains length of the Railtrack limit. Was hard to tell as the track does a sudden right turn under an overbridge, at a former junction with other long-lifted lines. 60073 stopped under the bridge so we couldn't actually see the end-of-line and have to trust this was indeed the Railtrack limit.

Track scratched and I wandered back to coach A and enjoyed 50031 back to Blackpool - where we arrived at 17.41 instead of 17.04 as booked. The main tour was booked out again at 18.13 but with the stock having to be taken out and the 50 run-round I didn't hang about and instead headed off into Blackpool for a meal. I suspect it left late as a call from a friend who was at Stafford about 8.30pm confirmed it hadn't reached here and it had been due at 8.14pm.

Enjoyable as part of my whole day out, shame Haydock wasn't done but due credit must go to the train organisers for standing their ground on the Hays branch! On checking out my scribblings after the event I also notice I scored my last "tin rocket" (class 153) for sight during the course of the tour.

"The Northern Lights" timings:
(booked only)

Nor' by Nor' West timings: