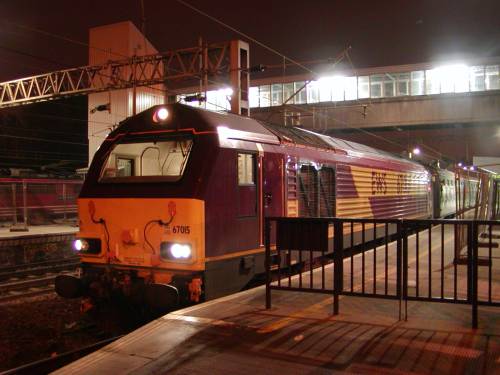 How sociable - a railtour that picks up at my local shack at 10am! Heading for Blackpool had the added advantage that it would put me in position to also travel on the Pathfinder "mini" tour which was showing as leaving Blackpool an hour or so after we were due in and back about three hours before we left again.

Unfortunately the finalised timings varied somewhat on both tours and I ended up on a "-3" with the Pathfinder trip booked out at 13.24 and our tour being booked in at 13.27 - wow, thanks Railtrack!

Walked down to the station, arriving about 9.30am and meeting up with my family (this, it seems, has turned in to a family "tradition", our day in Blackpool each year courtesy of Hertfordshire Rail Tours). A few minutes behind time and in rolled our train, 67015 at the helm. Damn...for the second Saturday on the trot I manage to get myself behind a dud 67! Had 67015 back in July when it took over a Past-Time Rail charter at Northampton! On that occasion the move to score the skip meant I didn't get back home until 1am on the Sunday morning. Now, with hindsight....

Our routing to Blackpool was to Rugby (66518 & 66520 stabled in the station and 66084 & 66134 in the yard) then via the Birmingham area due to engineering works having shut the Trent Valley route. Coventry, Stechford then a moments brief excitement passing the Alstom works at Washwood Heath - literally packed with new vehicles - some in First Group livery (180's?) and the rest in Virgin (Pendolino's I think - I heard someone say at least one vehicle had a pantograph).

Called a colleague, Tony, as we approached Stafford - he was on the Pathfinder tour. "How's it running?" I asked. "On time at Crewe" came the reply.

Rolling in to Crewe past Basford Hall yard and there were the normal multitude of "Freds" to be seen in the distance (why can't Freightliner put nice big numbers on them like the EWS ones?). The only one I did manage to identify as 66528 - good, my first "cop" of the day!

A pause at Crewe to change crew then off again northwards. Approaching Wigan we slowed to a crawl enabling lots of ink to be used passing the EWS "Component Recovery" site on the former Springs Branch MPD. We continued to crawl and then I received a text message from Tony which said simply "30 late at WNW" - hmmm, so they were only just in front of us and this as most probably why we were crawling!

In the next couple of minutes I came by two stories as to why their train had been delayed - one said it was dragging brakes on the loco, the other that it was dragging brakes on a coach! Which was right? Did it really matter - it meant I was now in with a better than fair chance of making the mini-tour at Blackpool as, upon arrival, they still had to attach the class 60 onto their stock.

Warrington : oh look - 37707 on it's tod - so the infamous pairing of 37707 & 37886 (beloved of so many Pathfinder tour participants this year) seems to have ended...but probably just until the next tour requiring a pair of tractors...

We were just rolling along nicely between Kirkham & Poulton-le-Fylde when I got another text message that simply said "60073" - yep, that was the rumoured loco for the Pathfinder mini-tour. That implied they were at least into Blackpool.

The stagger in was quite nerve racking - 60073 was already on the stock and we came in on platform 4 and Pathfinder were on 2, meaning a rush round to catch their train. In the event it seems the anticipated hordes migrating from tour to tour didn't exactly materialise - I think there were just two of us!

Safely on.....and we sat for 8 minutes before departing...ah, but that's another tour review! You can read all about that in the Nor' by Nor' West tour review. Don't forget to come back here though!

So, we arrived back into Blackpool at 17.41 after what could probably be described as an "eventful" mini-tour. I took a few minutes out to photograph 50031 (actually 431 - it depended on which side you stood as the loco carried different identities on each side!). After chatting with some of the Fifty Fund crew I headed off into Blackpool to meet up with the family for a bite to eat and look at the illuminations (after all, that in theory was why we had gone!).

Went up-market on the food front and had a sit-down meal in a Chinese restaurant then we wandered over onto North Pier to catch some night shots of the promenade and tower before heading back to the station. Was lucky to snap off some shots of a couple of the illuminated trams too.

The journey back from Blackpool was quite uneventful - the complete reverse route from the mornings journey. An on-time departure from Blackpool turned into 16 minute early running by the Birmingham area but some staggering and an unscheduled stop at Rugby brought us back nearer to booked time. We pulled into Northampton at 23.27 against 23.32 as scheduled. As we walked away from the station, 67015 could just be heard departing at 23.35 over the sound of arguing drunks!

All in all, for a "normals" day out this trip can be recommended. Blackpool is incredibly "tacky" but somehow it works and filling the time there is never a problem.