Notes :
The run to/from Crewe & Southampton was also sold under the "Southampton Excursion" name for passengers wishing a day in Southampton.

This was Pathfinders second attempt to "scratch in" the Hamworthy Quay and Furzebrook freight branches after the previous attempt ("The Dorset Mariner") went horribly wrong. In recognition of this, those of us who were on the original outing were offered, for free, an equal number of tickets on the latest tour . Thank you Pathfinder - your offer was appreciated and I took up the option for my two tickets.

On the last tour a pair of 33's were primary motive power however this time round we only had a pair of EWS sheds to look forward to. Friday night gen suggested 66222 and 66064 - pleasing for me as 66222 was one of only 11 EWS 66's I still require for sight, and both were required haulages. Saturday morning gen had changed and 66222 plus 66194 were being quoted - good, both still haulage winners for me.

Sure enough, 66222 duly turned up at Barnt Green (my joining point) a few minutes early. Hopped on board (coach A, at the front) to find a couple of colleagues already in place. Although the windows were open, our first coach position was not near enough to really hear the thrash (?) from the shed. Not a great loss mind you....

Another colleague joined us at Cheltenham Spa and we "yinged" our way towards Southampton via Bristol Parkway, Bath Spa, Salisbury and Eastleigh. 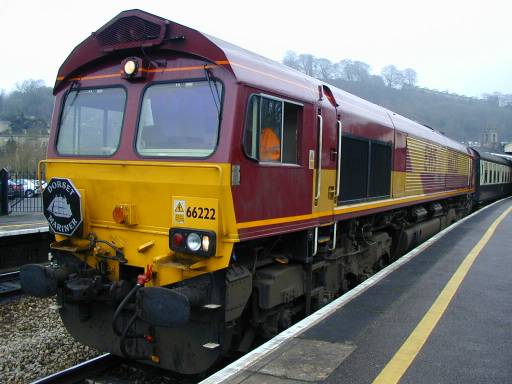 Early arrival into Bath Spa on the outward leg enabled a quick shot of 66222 to be obtained.

As we approached Salisbury we were passed by 35028 "Clan Line" which was on it's last railtour duty. Some new SWT Turbostars were spotted on the depot by the station. By the approaches to Eastleigh we were running about 20 minutes early but we sat at the junction prior to the station until due time before heading to Southampton and the last pick-up point where some more friends joined us.

The afternoon was spent whizzing back and forwards in the Poole area :

At Furzebrook we pulled up at bridge 11, until recently the end of this freight branch, however newly laid track stretched away in front of us and this will become the link onto the steam railway at Swanage. No doubt we'll all be back to scratch this in at some time!

On this visit to Hamworthy we did make it (very slightly) further than last year - 66222 pulling up just at the points shy of New Quay Road Level Crossing - about half to three quarters of a train length further than we last made it.

At Branksome we lost 66222, leaving 99194 to return us northwards. On the approach to Westbury we passed "Clan Line" going the other way again. Our arrival into Westbury was 7 minutes early however the booked non-stop passage through was not to be and we pulled up at a red signal. We sat....and sat...

An announcement over the pa system said we'd be sat for "about 10 to 15 minutes" due to "operational difficulties in the Bristol area". In fact we were there for about 40 minutes.... 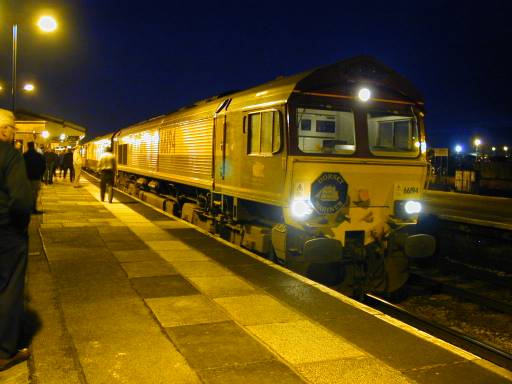 The unscheduled stop at Westbury on the return journey gave the chance to capture our other shed, 66194.

Interestingly the excuse, sorry - reason, for our delay then changed - we were being held here as our replacement EWS crew were on a very late running Virgin Cross-Country service an not expected into Bristol Parkway until about 8pm. We were being kept at Westbury until their train was leaving Cheltenham Spa so we should arrive about the same time into Parkway station. Seemed a bit strange holding us so far away from the crew-change point, but better this arrangement (leg stretching opportunity etc) than being stuck for 40 minutes in a loop somewhere!!

The remainder of our journey home was spent around 30 to 40 minutes late. I was looking forward to my first 66 up "The Lickey" and have to admit the performance was actually quite impressive - on a lightly loaded 12 coaches we topped the summit at about 30mph, far faster than some other occasions I've sampled in recent times! Despite the fierceness of the gradient, 66194 was still unheard even with an ear out the window at the front of the third coach!

Verdict : Not a bad outing - the days mission was achieved with Hamworthy and Furzebrook being traversed. Being free (for most on board) made it a good value day out too!