Notes :
(1) Derek Thompson comments: This trip was advertised as a pre Christmas duty free run following the same trip the previous year. It involved going out on a morning sailing returning in the afternoon giving around 6 hours in Boulogne. The trip down was uneventful. On arrival at Folkestone Harbour a force 8 gale was blowing and the sailing was doubtful but Sealink decided they were going to operate. The sailing departed on time but the weather got worse as the ship crossed the channel. When the ship approached Boulogne we were advised the harbour was closed due to high winds and the ship would be unable to berth. The ship then circled outside Boulogne for 2 hours in very rough conditions. The ship was eventually allowed to berth. The shipping schedule descended into chaos and the return ferry was running very late. Upon boarding the ferry an announcement was made to advised that due to poor weather conditions Folkestone Harbour was closed and the ship would be diverted to Dover Western Dock. It transpired that the ferry that we have come across on had collided with the harbour wall Folkestone on the return working. Arrangements were made to move the train from Folkestone to Dover. Upon reaching Dover again the ferry sat outside the harbour for over an hour. Because of all the train passengers the ferry would have to dock at Western Docks (which was little used at this time, shortly before closure of the station) rather than Eastern Docks. All the tugs were assisting ships to berth in Eastern Dock and none were available to go over to Western docks to assist our ship to berth. Eventually one as made available and the train departed Dover just over 6 hours late. By this time on a Saturday night may routes had started shutting down for engineering works and the train was diverted by a number of unscheduled routes. Arrival back in Carlisle was just short of 8 hours late which in reality was 9 hours late because of the change of clocks from Summer to Winter time that morning and the clocks had gone back 1 hour. 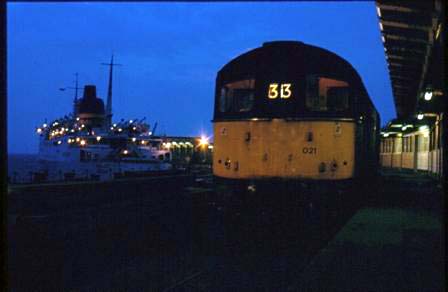