Notes:
(1) To points at far end of run-round loop, beyond bunker.
(2) To point well beyond bunker.
(3) To point well beyond road overbridge.
(4) To beneath road bridge just before Ledston station. Location given as Ledston in STN.
(5) Tour did Woolley Coal Siding Loop (through Reception Sidings & back onto main line) and NOT the west side and bunker as advertised.
(6) Kevin Driscoll questioned the 1R90 headcode as shown on the timing sheet & Ian Umpleby confirms the STN gave this as 1G50. 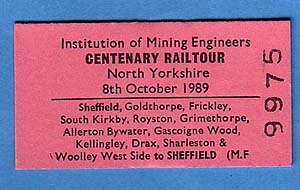 Sources : Paul Griffin (on the train throughout) & Kevin Driscoll