Notes :
(1) Route confirmation required - above is from booked timings. Was due for steam haulage by 6998 'Burton Agnes Hall' from Didcot to Worcester and back however Neil Mewes comments: The train was operated throughout by 47 817. As steam loco was supposed to have been used, but due to high temperatures the 47 worked throughout. Passengers could change at Kidderminster for a round trip on the SVR but the train went through to Worcester (its final stop) and servicing. Whilst it was operated on behalf of the LCGB it was actually funded by the late Roy Card. Both the late Brian Girt and myself arranged tickets, seating plans etc (many an evening was spent of the project!). On the return there was an additional stop at Streatham to let off a couple of elderly passengers. 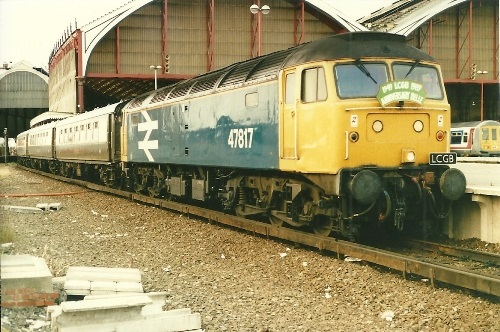 Timings (Booked Only)
(from John Broderick)