Notes :
(1) Howard Parker comments: Visiting Preston for the second time, it was announced that the train was awaiting the crew for the next part of the journey, although this wasn’t marked as such in the itinerary. The brief stop at Carnforth was to pick up the guard. Withdrawn 20220 and 20221 were noted in sidings at Upperby, as was 85022 with fire damage.

Sources : various including Howard Parker (joined/left the train at Leicester) 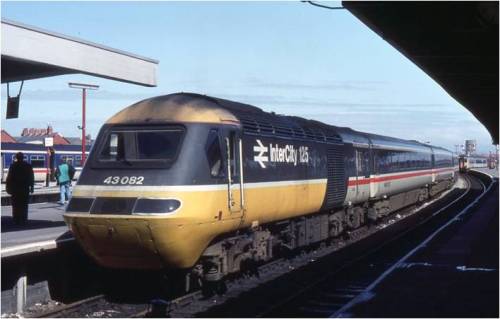 43082 at the stops at Blackpool North (photo: Howard Parker)

This photo from David Wildgoose was believed to have been of this tour, taken at
Appleby - can anyone please confirm 43084 was one of the two power-cars
used on this date? If yes then the routing was via Chesterfield and the Hope
Valley. 35028 'Clan Line' was passed at Appleby, it was carrying a 'Cumbrian
Mountain Express' headboard but there are no other details for this tour...
can anyone confirm what it was and provide more details?

Webmaster update: Howard Parker has supplied details of the HST used as 43082+43107 thus the photos immediately above and below are not of this tour/date. 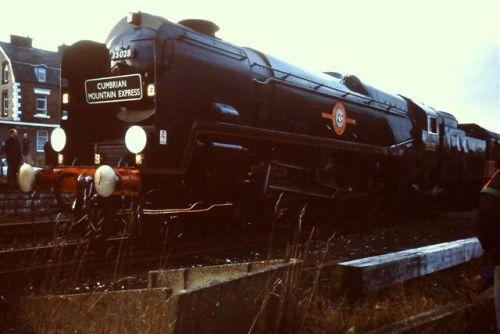