Notes :
(1) Part of the GW150 celebrations.
(2) Both steam locos stalled on Dainton Bank and had various attempts to get going without success. 50045 came on the rear and banked the train from m.p. 217 to 218 right by Dainton Tunnel box. 50045 was detached there then followed to Totnes where the train was terminated rather than running through to Plymouth as booked.
(3) 50045 assisting from rear. This was originally reported as 50007 but photographic evidence confirms this to have been incorrect info. The use of 50007 from Totnes forward is assumed correct.
(4) Booked route was: Cogload Jn - Castle Cary - Heywood Road Jn. 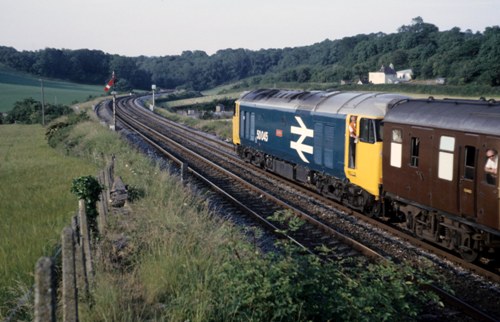 50045 'Achilles' assisting from the rear on Dainton (photo: Bernard Mills)