By Trevor Cockram and Stew Robertson - on the train Euston to Crewe.
Report after Crewe by Dave Wilkinson.

The signal box setting the wrong route via the fast lines should have been an omen as to what was to happen on this tour. Luckily the driver knew we were booked via the down empty carriage line and arranged for the correct route to be set, and we departed only a minute late, but by the time we got the Coventry we were 12 minutes late due to a signal failure at Kilsby tunnel. After attaching the boilered 25's we departed, but very slowly, all was not well with the loco's. At Bescot we were put onto the goods line to change to a pair of 25's that would work in multiple, but without heat. By the time of the Derby reversal we were 76 minutes late, but a quick run-round clawed a few minutes back by the time we got to the WCML. Signal checks behind the 11:50 Euston-Liverpool got us to Basford Hall 96 minutes late. The booked route via the independent lines was lost as the signal box had closed so the loco change to the 40 took place on the through roads at Crewe station loosing another 9 minutes.

The highlight of the trip was the run of the Clock Face branch, which I had lost on two previous trips and was due to close for motorway works. Problems with reversing at Ditton Junction made us 113 minutes late by the line we took the line past Widnes No 1 and under the WCML at Arpley. A fast run across the Cheshire Plain clawed back a few minutes only to be lost waiting for 25276 to come off the Peak Forest line at Chinley North Junction. The weather which had been dull and cold distinctly got worse as we climb to Buxton, which according to the BBC had been cut off by blizzards. The snow was deep as the Area Manager demonstrated as he disappeared up to his waist in the snow going up the signal box in the reversing loop by the old MPD. The points had been dug out where we ran-round and returned to Chinley North Junction only 101 minutes late. The train crew took the chance to do their own photostop before we took the East curve to Edale. The tour instructions was passengers to detrain during the run-round were rescinded as the snow was now quite heavy. No time was lost to return via Guide Bridge and Stockport, by which time the weather had changed again to clear skies.

Arrangements were made for passengers to use the 17:30 Glasgow-Euston from Crewe as it would be after midnight before the tour got back to Euston. Stew and I bottled out of the tour at this point and just made it home that evening.

The snow had rapidly being heading south and by the time the tour got to Bletchley, 141 minutes late it had resulted in the overhead power lines loosing their juice. 25302 was sent out to rescue the tour and it eventually got back to Euston at 03:32, 309 minutes late. 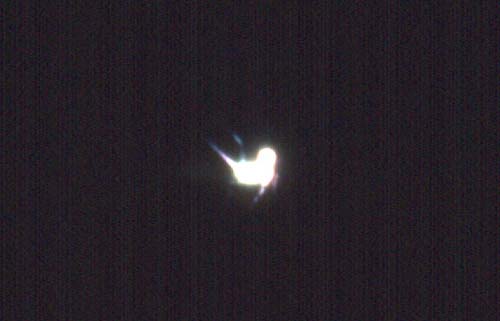 Unidentified Flying Object? No, according to LASERman: This is a shot of of
the arcing and flames from the pantograph of 83007 attempting to start away at
Lamb’s Sidings whilst working the Palatine on 25th April 1981 (actually about
0010  on 26th at this time). Having been at a stand for about 5 minutes in heavy
wet snow it just proved to be impossible to get started.
I would think there was very little carbon left on the contact strip after this.