John Clifford comments: This was a tour which looked interesting and as it was advertised as using 34015 which I had not had for haulage I booked. Things went wrong early on with single line working between Farnborough & Hook. Then the Pannier tank stalled coming into Cholsey & had to be helped by 34015. On the Oxford - Bedford section we had a number of signal checks with consequent slow running both ways as well as another bit of single line working between Stewartby & Bedford. All in all, not one of my better tours. 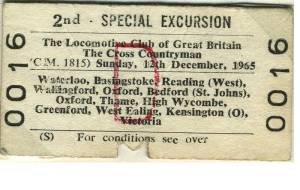