Notes :
(1) Two sections made up this tour, eight coaches from Crewe, four from Liverpool, combining at Manchester. The joining of the train was not without incident due to one of the coaches not being equipped with a gangway adaptor. This prevented one half of the train reaching the buffet car on the outward run. The tour also include a visit to York Depot where a third Jubilee, 45694 'Bellerphon' was being serviced. 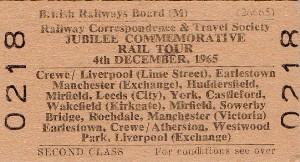 Timings (Booked Only)
(from Ian Umpleby & The Bluebell Railway Museum)