Notes :
(1) This tour used seven coaches and a somewhat begrimed 8F to visit numerous freight only lines in the South Yorkshire area. Despite a very foggy start to this trip and the torturous route undertaken the arrival back at Leeds was only thirty five minutes late. 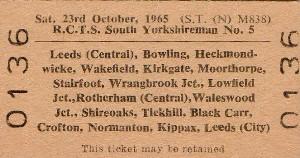