Notes :
(1) At Llanelly, the tour party was split. One half boarded buses to Sandy Jn. for another train to Tumble via Cross Hands. The other half remained on the main train to Pembrey& Burry Port where they boarded another train to Cwm Mawr. One half of the party walked from Tumble to Cwm Mawr whilst the other half walked in the opposite direction thus changing trains. The trains returned to their respective starting points, the group returning to Pembrey & Burry Port boarded the main train which then proceeded to Sandy Jn. At this point both groups visited Llanelly Steel Works and then rejoined the main train. 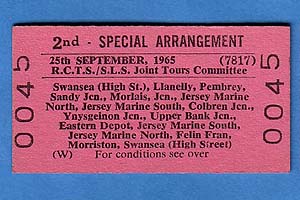 Timings for Group A:

Timings for Group B: