Notes :
(1) John Clifford comments: This was an interesting tour covering part of the Somerset & Dorset which was to shut to passengers less a year later. We got there by a very roundabout route using the Central Division which saw very little steam by this time. The highlight for me was the run from Templecombe to Wimbledon which we were booked to do in 105 mins for the 105 miles. We had a light load of only 7 coaches but had a late start from Templecombe and we got to Wimbledon in just over 95 1/2 mins despite 3 signal checks, a signal stand at Tisbury & a permanent way check at Semley (30). On the climb out of Salisbury speed had risen to 71 at Allington Box. After passing Worting Jn at 81 speed was in the mid eighties in between the signal checks most of the way to Wimbledon. I estimate a net time of 88mins. 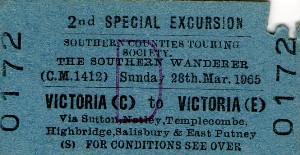 Sources : John Clifford (on the train throughout) & John Debens