Notes :
(1) 41284 on rear.
(2) 41324 on rear.
(3) David Woodcock comments: there were three round trips - Saturday morning, lunchtime & afternoon. I travelled to Easton on the second and returned to Weymouth on the third (and last train). I suspect the South & West Railway Society might have been a group formed specially for the purpose of organising these last trips as I hadn't seen them advertised and I (in London) only found out about them by chance late on the Friday evening - I was lucky to be able to purchase a 'standee' ticket on the day. Melcombe Regis station was alongside, but slightly apart from, the main station at Weymouth - it had nominally been closed in 1952 when the Easton branch closed to passengers, but was sometimes used officially (i.e. in Public Timetable) or unofficially for Summer Saturday arrivals. 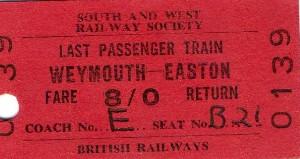 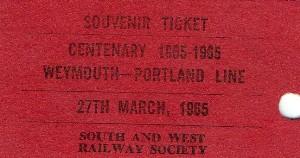