Notes :
(1) Loco propelling.
(2) Problem reversing from Brunswick Wharf to Heaths Jn for run-round - train had to be split.
(3) Tour booked to return from Macclesfield to Ancoats Goods was :Bollington - Rose Hill Marple - Marple Wharf Jn - Romiley - Belle Vue - Reddish North - Ashburys but was diverted into Piccadilly and then to Ancoats via Ashburys. This was due to the expected new crew not being available and the existing crew did not know the route (though they volunteered to continue to get the train back). Arrival back was approx 1 hour late.
(4) 42343 on rear. 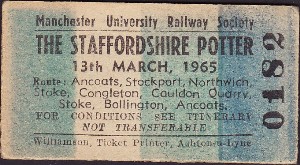 Sources : Terry Jackson (on the train throughout) & Dave Groves