Notes :
(1) Originally uploaded as both pre-advertised and hauled on the day by 46245 'City of London' however this was challenged (loco 46256 'Sir William Stanier' being suggested instead due to non-availability of 46245) but John Robin has photographic evidence of 46245 at Crewe about to return the railtour southwards.
(2) For visit to Crewe Locomotive Works (but not the South Shed). Though questioned, two confirmations have been received that the train did go via Shrewsbury on the outward leg.
(3) Nick Deacon comments: I was amongst the many that made the trip that day and I believe that this was the last performance of active of service for 46245. The trip left Paddington late due to injector problems and the trip north was dogged by frequent stops (three I think) for water. I don't recall the trip doglegging via Shrewsbury otherwise we would have never reached Crewe! [see note (2)] As it was we had less time at the Works than planned. The tour was not specifically dedicated to the 'last of the Coronations' as such but more as a 'routine' trip to Crewe Works under the usual banner of an 'Ian Allan Railtour'.  The loco sheds were not included, although I do recall some of the party not bothering with the Works and bunking Crewe North! The return trip was less fractured than the outward and the loco performed adequately. The tour was not one remembered for loco performance! John Robin however comments: I took timings but do not recall poor running or frequent stops. 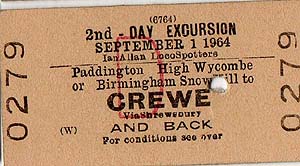