Notes :
(1) Run to commemorate the 15th anniversary of the 1948 Locomotive Exchanges.
(2) Originally listed as 24th March 1963 in error. Some confusion exists in published records between this tour and the Hampshire Railfans tour of 17th March 1963 which also used 'Mallard'. The above is believed to be correct for the route and organiser of the tour that ran on this date, contrary to what other published records may suggest.
(2) A change of train was made at Tiverton Junction. Pre-tour blurb commented that only 225 passengers could be carried on the Hemyock branch. 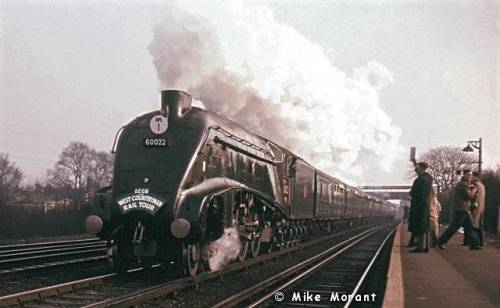 60022 gets a wave from a spectator at Raynes Park (photo: Mike Morant) 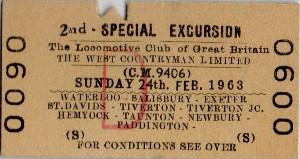 Source : John Clifford (on the train throughout) & N.J. (Gas) Hill