Notes :
(1) Route & loco confirmation required. Seen at West Meon & Privett. SLS members were given an invite to travel on this train. It had been questioned if this tour and the REC trip on the same date are one in the same tour however a ticket subsequently supplied for that outing shows a different routing, suggesting it was a different train. 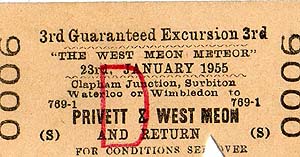 From the John Debens Ticket Collection.