Notes :
(1) David Whittaker comments: Organised to mark the withdrawal for scrapping of the last Ivatt Atlantic in service. Outward schedule was 195 minutes, return schedule was 158 minutes. On arrival at Doncaster - on time - a worksplate from 62822 was presented to H G Ivatt, son of the designer of 62822, and also the CME of the London Midland Region. Later 62822 was driven into the work's yard. As a participant remarked, 'She certainly died in harness'! A guided tour of Doncaster works was available to tour participants, in groups of about 20. Finally the A1 Pacific 60123 'H.A.Ivatt' was the natural choice for the return journey to London. The return journey, despite some good running, was rather spoiled by delays and the need to detach a kitchen car (no. 5123), which had developed a hot box, at Hitchin. 50mins were lost inspecting the vehicle at Biggleswade and a further 20mins removing it at Hitchin. Foggy weather, the loco & signals were blamed for the remainder of the delays.
(2) Although the reporting number was given as 315, the STN was referred to as 'Circular X.698'. 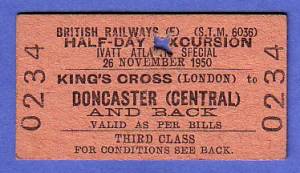