Notes :
(1) Route confirmation required - above is from booked timings. It was expected, if the train was to exceed five coaches in length, that an assisting loco was to have been added (double-heading with the train loco) at St Helier to cope with a 1:44 grade that the train was to tackle. That being the case, an 8min stop was being allowed at West Croydon and arrival into Victoria was to be at 16.58 instead of 16.48 as below.
(2) Photo evidence confirms 31722 was in sole charge at Cannon Street and West Croydon, 32418+31722 at St Helier. 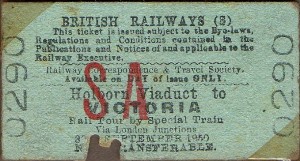