The routing of this train was as advertised in the Railway Touring Co. brochure excepting that the return journey was routed via the main route between Sevenoaks and Bromley South (i.e. via Orpington) and not via Bat and Ball. This was a small disappointment as the route through Bat and Ball is seldom if ever traversed by the current menu of steam hauled special trains. However, the loss of this route allowed for a very respectable arrival time in London Victoria – just before the evening peak. A later arrival would have probably been a no go, due to platform utilisation at Victoria – hence the brochure advertised arrival of 18.00hrs.

The choice of 22nd December was very lucky as snow disrupted normal train services on the 21st and again on the 23rd. Indeed the service on the 22nd was advertised as an enhanced Saturday service. Much snow was in evidence particularly on the Downs. The coastal route from Ashford to Hastings was clear of snow but snow was soon much in evidence again as we turned inland from Hastings.

Class 47 number 47760 brought the empty stock into London Victoria with 34067 already attached at the country end. The class 47 also gave banking assistance as the train departed from Victoria but this was the last that was seen of same.

In respect of 34067 and its performance there is little to say. The 9-coach train appeared to be well within Tangmere’s capability and the train was never more than 10 minutes adrift from the schedule on a day when punctuality of normal service trains was very poor due to the adverse weather conditions. I travelled in the seventh coach of the nine coach set and the steam heating was more than adequate to make the journey comfortable throughout. The outside temperature was barely if at all above freezing. 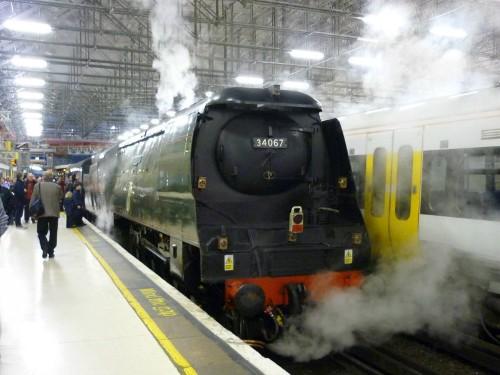 34067 'Tangmere' on arrival back at Victoria station (Gordon Jakes)