Notes :
(1) 11405 on rear.
(2) 176 on rear.
(3) During the pathing stop at Lalden, the train was reversed back out of sight in the Spiez direction and a ‘false arrival’ was undertaken for photographs.
(4) An off-train visit to the ‘SBB Historic’ Depot was available. In addition, the Ae6/6 and BLS 425 were swapped to the opposite ends of the train.
(5) Stuart Clarke has provided the tour mileages which can be downloaded here (Word document).

After yesterday’s excellent tour, we all had high hopes for today. Unfortunately, ‘a communication error’ had resulted in the requested loco being used elsewhere, and so we had BLS 176 to start the day. Although some will have no doubt ‘scored’ this loco, most had had it as recently as April 2009 when it operated on another Charters Helvetica tour. On the rear of the train was SBB Ae 6/6, number 11405 (the second oldest of the class still running in traffic), so this more than made up for the wrong ‘brownie’ on the front. Like the previous day, we followed the Thuner See out to Spiez, where we reversed and took the Lotschberg route towards Brig. As with previous tours along this section of line, various yards and non-passengers tracks had been requested to add spice to the journey. The spectacular scenery and twisting nature of the route ensured that the journey Southwards went very quickly indeed. We had a spot of wrong line working through the actual Lotschberg Tunnel itself, taking the northbound track through the entire length.

At Lalden, we had time built in for a ‘false arrival’, which after passengers had disembarked; the train was propelled back a few hundred yards out of sight, then (with everyone in position) made a run towards us again. Just as we were about to depart, 465016 arrived on an ‘additional’ for Brig, being run to alleviate overcrowding on the new Lotschberger Units!!!! (and who says it’s only the UK that does away with loco-hauled services). 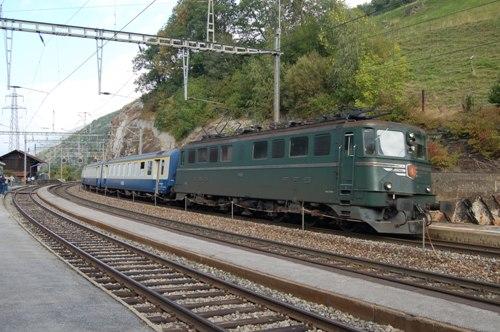 11405 during the 'false arrival' at Lalden (photo: Stuart Smith)

Back on the move again, and we dropped down into Brig and took Track H12, and then along to Platform 90. This platform serves as the loading platform for car shuttles through the Simplon Tunnel, so does not see regular passenger use. Once through the tunnel (passing the Italian border at the midway point) we emerged into Iselle. For our reversal here we used Track 5, which is used for the car-unloading process. A short photo stop was taken here which also saw 465010 heading light engine back up from Domodossola. From here we retraced our path back through the Simplon Tunnel, then through Brig again, but this time taking the Rhone Valley route along the valley floor. 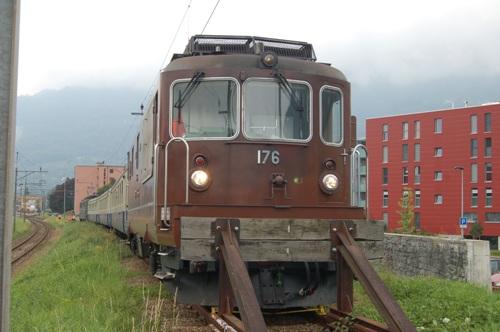 176, having made contact with the buffers at Monthey (photo: Stuart Smith)

A fairly uneventful journey followed, (broken only by the use of the yard at Visp) until reaching St-Maurice. Here we took the single line branch to St-Gingolph, which once formed part of the through route to Evian, France. At Monthey we had to pass the service train, so rather than just sit in the main platform, we had time to ‘shunt’ into track 45, which serves as a head-shunt for the adjacent loading facility. Another short break at the end allowed time for ice creams, beers, paddle ship spotting or watching ‘dare-devils’ on homemade carts speeding down the local hills.

Back at the mainline junction of St-Maurice, we had an hours break for a visit to the SBB Historic Museum. There were only three items of rolling stock (two small shunting loco’s and one ‘kettle’) in the actual depot buildings, although several other items of stock were in the main yard itself. Whilst also here, our two locomotives were switched around from one end to the other. (This was done so that the SBB loco would be leading for the return journey).

Suitably refreshed, we started our homeward journey. The first deviation took us through the yard at St-Triphon, then via the VCh line from Vevey. Whilst waiting at Vevey, ex-BLS ‘heritage’ Loco, number 208 was noted in the adjacent platform on special excursion (this loco is hopefully going to be used during part of the April 2010 tours, although you didn’t hear it from me if it doesn’t happen….)

After the steep climb to Puidoux-Chexbres we took the main line as far as Palezieux before branching off on to the secondary route: Line 251. For added bonus at Lucens, we made a shunt onto the St-Gobain Isover branch (designated as Track 80). Unfortunately the ‘overheads’ only went a short way, so we didn’t get anywhere near the buffers on this occasion. Continuing along through Payerne and Murten, we arrived at Kerzers and duly reversed in Platform 3. From here we took the ‘rare’ North to East curve, and made our way towards Bern. Departing from the Capital, we took the mainline as far as Thun, where we ran via the freight yard, using Tracks 145 & 240, and then on to Spiez. Here we had our final loco change of the weekend.

Since leaving St-Gingolph earlier in the day, various rumours had been circulating through the train as to the ‘mystery’ loco that would be attached. Would it be a 486+465 combo, a new pair of 425’s, or something else from within Spiez depot? After a quick loco change (not !!!) the headlights of 465018 and 465002 appeared from the depot and duly backed on to the stock. 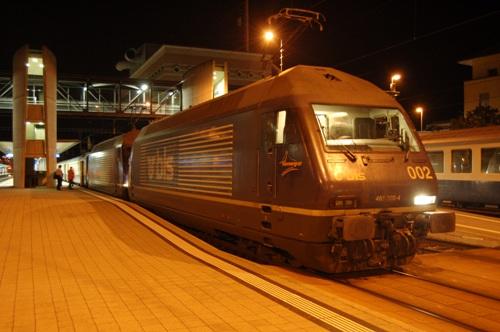 So that was that, all that remained was for the pair of ‘blue cruisers’ to speed us back to Interlaken. Some were happy with the final pairing, others not so. Personally I was, as I required 002, but had had 018 on the tour back in November 2005. So at just after 9pm, we arrived at Interlaken Ost (Platform 6) to round off another two successful days of railtours with Charters Helvetica.