As usual the day started early at Interlaken Ost. The good news though, was that we had two winning locos to start with: BLS 189 and SBB 11424. The initial part of the journey took us along the shores of the Thuner See to Spiez, before heading northwards to the capital at Bern. Today’s main destination was Geneva, although it would be many hours until we actually reached there due to the interesting route we were scheduled to take.  Mainline running took us through Bern station itself, and then across to Neuchatel on the busy secondary line. Our first ‘deviation’ was at Le Daillens, where we traversed the Postal Sidings (La Poste) which are solely used by the ‘yellow box’ trains you see all over Switzerland. Royal Mail could have learned a think or two here!!!

At Bussigny, we swung right and took the ‘freight-only’ flyover across the mainline and dropped down into Lausanne Yard. This is undoubtedly one of the largest yards in the country and there was no shortage of motive power stabled on the depot all waiting their next turns. Rather than just reverse in the yard, we were booked to traverse the loop that is used to turn trains at the Western end. Taking an anti-clockwise route, we took tracks 772, B9, N1, N2, N7, L8, L6, L51, L5, L4 in order to complete the circuit. Exiting the yard (but this time facing North-East) we made the short run through Renens and onto Lausanne-Sebeillon. This is a small yard close to Lausanne station, albeit it on a much higher level than the main lines. A photo stop was available here, although there were no other trains visible apart from ours. 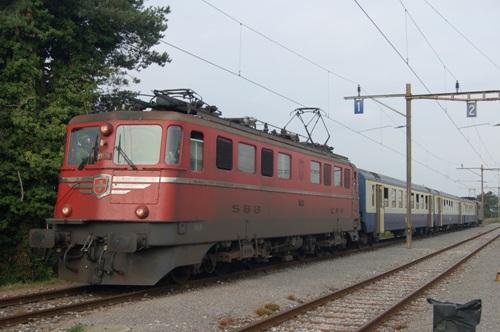 In the original tour programme, we were due to take the 5km branch to Tridel, which serves an underground combustor! However, due to fire regulations, our passenger train had been refused entry.  After the photo stop, we took the single line spur back down to the main line and ran into Lausanne station for a reversal. Since leaving Interlaken this morning, we had had the SBB locomotive in charge the whole way, so now it was time for the BLS machine to earn it’s place on the train… Oh dear, it didn’t seem to be that healthy at first, and several ‘gentle shoves’ were needed from 11424 to get things moving (by the time we passed back through Renens, all seemed to be well with 189).

A quick run down to Morges followed, where it was ‘all change’ and on to the metre gauge stock of the BAM system. For the next 3½ hours we would cover the entire network, including the freight-only branch into the Army Base, at Biere-Casernes. It had been hoped to get both of their locomotives on to the train, but unfortunately, one was out of service for overhaul prior to starting a new freight flow in the coming weeks. So, locomotive 21 (a Ge 4/4) would be in charge the whole way round the system with 3 coaches in tow. The first branch covered was that to the army base. We reached the ‘arrival’ run round loop before setting back into each of the three loading sidings to cover all the available track at Biere-Casernes. (Suitably impressed were the BLS members on board I’m certain). Having run round, and leaving via the ‘departure’ loop, the loco hauled the train out to the junction at Bifurcation, and then propelled us back into Biere station itself - a distance of just over 1.3km. A short break and depot visit took place here before we headed for branch number three. The route to L’ Isle-Mont-la-Ville was fairly uneventful, although as with the previous two branches, every inch of track at the terminus was covered for those with a surplus of ‘red ink’ in their pens. Back down the branch to Morges, and an opportunity to take a photo stop in front of the Vufflens Chateau was too good to miss. I’m certain all those who disembarked were suitably impressed with the shot on offer.  So once returned to Morges, it was time to say goodbye to the ‘little’ BAM train, and transfer back to the main train. 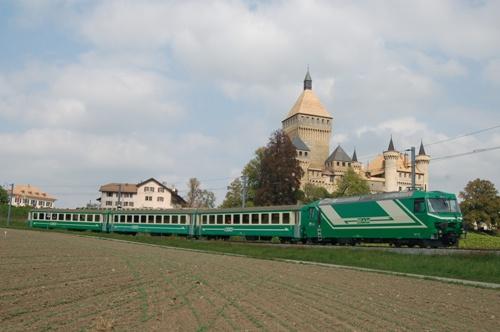 From here we continued South to Gevena (Genf in German) and through to the marshalling yard at La-Praille. The yard here is split into two sections, with the overhead voltage between the French and Swiss systems being the physical boundaries. To avoid any ‘electrical difficulties’, we utilised an SBB Class 841 Diesel (no. 841 038) in order to reach the extremity of the branch. This was duly completed and the photos depict our train firmly buffered up to the blocks amongst the undergrowth. Another propelling move took place to reach La-Praille again (this time on the French side), before the diesel locomotive ran round and dragged our train via the ‘rare’ curve heading away from Geneva. A short sprint along the goods lines took us out to Vernier-Meyrin, where we reversed right under the flight path of Geneva International Airport. A final run round by the 841 saw us then head back through Geneva station, before entering the Carriage Sidings/Freight Yard at the North end of the city. Here we lost the diesel, and awaited a return run back towards Interlaken. Once on the move again, we had a fairly straight forward run over the main route to Bern. From here it was as per the mornings outward leg, via Thun and Spiez to reach Interlaken Ost. 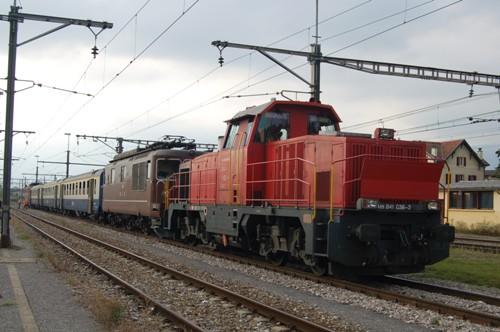