Notes :
(1) 179 on rear.
(2) 185 on rear.
(3) The train reversed at the frontier point, around 200 metres short of Delle station, access to the station having been denied.
(4) Train propelled out of siding by 185 before passing through Platform 2.
(5) As the train had been denied access to Delle station, 17 tour passengers (accompanied by 1 CH Steward) used the lunch break at Porrentruy to travel on the service train back up to Delle. This was operated by SBB unit 560062.
(6) The train continued approximately 10 chains beyond the station to the end of the AC overhead section.

Like Saturday morning we started the day with the same loco as the previous night. Today though this would only work as far as Spiez where it would be replaced by two class mates. Shortly after we arrived, 'brownies' 179 and 185 appeared from the depot and were duly attached one at either end of our stock. We would keep them all day until arriving back here in around 11 hours time.

Today we were heading for various freight and passenger lines in the North-West of Switzerland, close to the French border. The route today again took us to Delemont, but we had a different route via Kerzers, Biel/Bienne and Sonceboz to look forward to. At Delemont we were routed through the yard before continuing on to Porrentruy and then Courtmaiche. Here we took the non-passenger tracks behind the station buildings and branched off on the line to Bure. This line serves an Army base and is steeply graded as it forks away from the main line. In true track bashing style we 'kissed the buffers' of the headshunt before alighting for photos next to a train loaded with 28 tanks.

Back down the incline, we reversed before heading up to Boncourt. The line beyond here to Delle has only recently re-opened to passengers, but this particular passenger train was not being allowed. The French in there own particular style had refused entry to the charter, and thus we were stopped at the border point, some 200 metres short of Delle station. Close, but no cigar!!!

After photos at the border, we retraced our steps to Boncourt where we shunted via a dead-end siding to gain some 'rateable' track and also to let the service train pass. On this part of the journey, it was discovered that a move back to Delle was possible by service train during the planned lunch break.

So 18 people from the tour opted to take 560.062 to Delle and back. Delle itself has been completely rebuilt and a stop block erected at the end of the platform. The track remains in situ beyond, although much work (and finance) will be needed to reinstate this former through route.

After the little 'mini tour' was completed, there was just time to obtain provisions from the local shops before our final branch of the day. The line to Bonfol is operated by CJ and although the line continues beyond the passenger limit, it is not known what, if any, freight traffic still serves it. The AC overheads continued around 10 chains beyond the station, and it was to this point that the train reached. Several 'interested parties' walked a little further to try and see what was ahead!!!

Answer- It was just around the next corner so we will never know.

So that was it, the return run took us back via Delemont, Solothurn, Burgdorf, the Bern Avoider (yet again) and Thun. However, one last surprise waited at Spiez. BLS loco 174 was on hand to take us back to Interlaken to conclude a fantastic three days of railtours.
17 haulages in total (16 winners for me).

Footnote- Thanks as always go to Alan Spencer who makes the whole weekend happen, although credit must go to Stephan Michel, Willi Frauenfelder and all the staff involved from the BLS. Finally, we must say a big thanks to our two regular catering lads who keep us replenished during the travels. 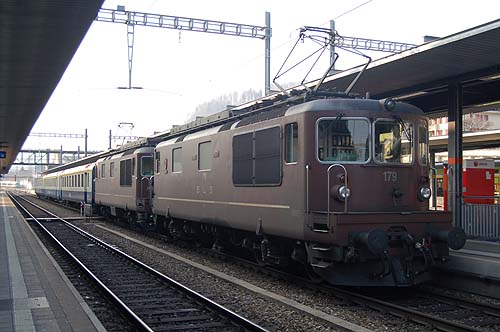 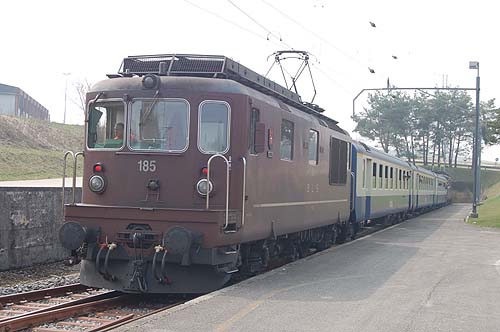 Touching the blocks at Bure-Casernes. 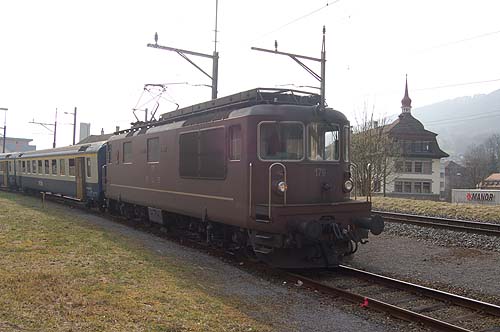 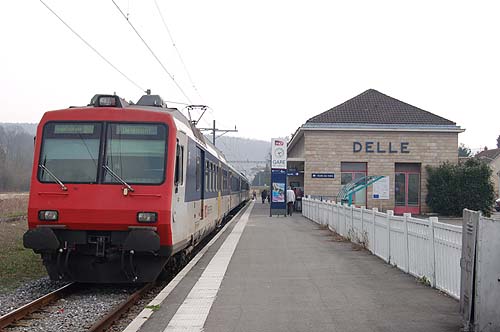