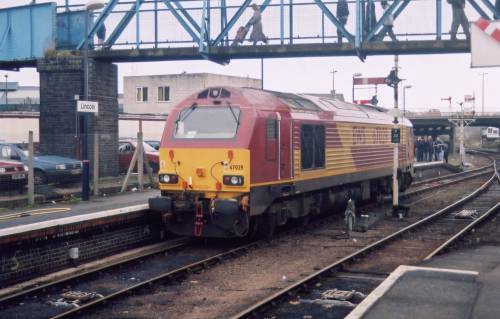 This was an enjoyable trip only spoilt by the usual abysmal operating which is only too prevalent these days, especially for charter services. Firstly there are the ludicrous timings such as 12 mintutes from the Kings Cross start to the Potters Bar stop which is bad enough but even more so when the train was switched to the local at Alexandra Palace.

Next, having left Newark a few minutes late, the tour arrived in the outskirts of Lincoln some 15-20 minutes early only to be stopped at West Holmes Junc. Not unreasonable you might think but we then proceeded some 15-20 minutes later into the Lincoln Up Goods Loop where we sat while the Pathfinder 37 tour (due at 12.42 approx) passed us on its way into the station. By the time this tour had unloaded and been despatched and a following service train had similarly been dealt with, we finally staggered into Lincoln sometime after 13.00. This performance was allegedly due to a mix-up between train managers about which train still had passengers eating their meals. The mind really does boggle.

The return journey fared little better. Lincoln managed to finally despatch the Pathfinder tour some twenty five minutes late for no discernible reason. Our train was due to leave at 17.35 but a late running service to Birmingham arrived in the main platform at 17.30 and managed to sit there for 10-15 minutes before trundling on its weary way. One wondered why this service could not have used the adjacent loop platform and the tour allowed to load up at the main platform.

However we duly left some 25 minutes late only to be looped at Claypole as booked despite the fact that whatever should have passed us there should have been long gone. Needless to say we stopped for the booked time before we were allowed to leave with the up main conspicuously empty throughout the whole time. Nevertheless by dint of some good running and a slack schedule, we passed Peterborough on time only to be looped at Connington where a GNER service eventually passed us. We passed Huntingdon about 15 late with eventual arrival at Kings Cross just over 5 late.

Timings : (Booked Only)
(by Terry Jackson)