(in conjunction with the Class Forty Preservation Society)

Notes:
(1) Strictly the tour started and finished at Birmingham New Street. The "stock movement" to get the loco and train to Birmingham from Crewe, and back at the end of the day, was however made available to passengers upon payment of a £10 fare which was additional to the main tour fare. The stock movement is therefore included above.

Source : Gary Thornton (on for, and enjoyed, every last minute of it!)

Some photos of the tour.

Still, I managed to drag myself out of my pit, get washed (well more water ended up on the floor than on my face), and get in our mate's car to Crewe. But I couldn't bring myself to sleep and instead stayed awake to Crewe, arriving shortly before half past six.

We (this is me, my dad, my dad's ex-boss and Gary Thornton) went down to the Quick Snack on platform 6 (which was remarkably wedged for that time of morning - most people were for the tour anyway) and met up with a few familiar faces more common at the East Lancs.  After some breakfast, we watched D345 roll into platform 12 and went over to join the train.  Today we were sat in coach B, with the CFPS, which although it meant it would be 9 hours until the whistling monster would be at our end, we would have the bank out of Holyhead (always one of my favourite bits of track) and Miles Platting bank to look forward to.

Some fast running from Crewe got us through Stafford and to Bushbury Junction, where we turned left and headed for Bescot.  Both 56099 and 56071 were viewed and bellowed at, before we carried on through Aston to New St where the tour proper began.  After some photos and meeting up with some more friends (aka the part timers) the tour carried on, round via Soho Pool and past Bescot again, retracing our route to Crewe where we had a rather long photo stop.  The time went quickly however, and the run onwards down the Coast began.  The last time I'd done this was just under two years ago, on the last day which wasn't with 37429 on the overnight, though I expect there were many on the tour whose last time was with a 40 at the sharp end!

Some not exactly high speed running (high 60s, low 70s) ensued to Llandudno Junction where there was a photo stop.  A few headboards were dug out for this!  Just before we left, 47786 departed on what could turn out to be the last 1D67, though I didn't bother photting it, 'cos it's a crate (well it is!).  We were just behind it and I expect it was your average 47 journey as the 40 wasn't exactly flying to Holyhead, though she did stretch her legs on the last bit (77 was the highest speed I got).

I don't like Holyhead.  I'm really only used to it in the early hours on trips to and from Ireland, but I did make numerous trips throughout the 37 era, which lasted for about the time it takes to walk to the good one of the two chip shops (this is the one which does fish too, rather than what should be known as the fish or chip shop which is rancid and can usually guarantee that you won't get what you want).  Naturally we went to the good one, which took all of 10 minutes, and whilst we were in there the spoon spluttered away towards Birmingham.  Back to the station and the time was spent photting the 40 from the bridge and road alongside.  Then she set the stock back into the platform and we awaited departure time.  All windows were open to their fullest extent and it stayed that way until the end of the tour, which should have been in 7 hours!  This was the run I was looking forward to, as I would clear 345 for the 1000 at Newton-le-Willows, home of all good power, though I make exceptions for Darlington (40s, 37s) Doncaster (for 56091) and Handsworth (33117).  The run along the causeway was spent with almost everybody on the train bellowing at the guy who was videoing us out of his sunroof!  He was seen to be putting in another brief appearance between the Junction and Colwyn Bay too.  Bangor was good, and as it was now dark I put the stopwatches away and concentrated on the loco.  The departure from Chester was good - in fact all of the run to Crewe was.  Warrington flashed past, the last time I was there was on the 28th of October when the very same loco stormed through on the first loaded test run.  This time did not disappoint.  A bit of respect was paid at the Vulcan Foundry and as the 40 was opened up through the platforms at Earlestown (not the side of the triangle I need unfortunately) and the people on the opposite platform didn't know what to make of it - after all, they're only used to pacers and sprinters aren't they?!

A brief celebration for me on reaching the 1000, but everyone on the train was looking forward to the ascent of Miles Platting bank.  As we rounded the corner at Deal Street I looked back from my droplight in the second coach and there were heads from just about everywhere possible on my side of the train!  The anticipation was nail-biting.  As soon as she was under the overall roof / monstrosity (I remember it as it was 'cos I had my beast 56091 into there) the driver nailed it and we were all bellowing at the shocked normals on the platform!  But the excitement didn't end there, she failed to disappoint on the climb to Miles Platting and it has to be said everyone was proud.  We pressed on down through Ashton Moss and Denton down to Stockport, where once again all of the normals on the platform were surprised at a 12-coach train of cranks flailing at them.  We thrashed down to Crewe where we stopped.  Some chose to bail here, but for us there was no contest - we were doing it to Birmingham and back.  We roared out of Crewe and the run down to Bushbury was quite good, though from there the customary West Midlands stagger ensued down to New St and back.  56006 and 37308 were sat next to each other (and bellowed at!) and it was fairly nostalgic.

And so we came to the last leg back to Crewe.  Not much sticks out as special, but that was probably because what had happened was still vividly in everyone's memory.

Yes, she had done everyone proud and I for one am looking forward to her next outing on 5th April 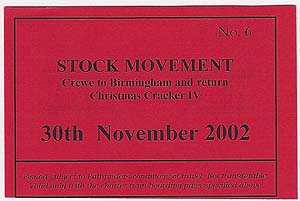 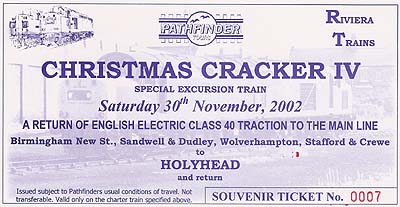 My last recorded class 40 haulage on the mainline was way back on 28th May 1984 when I had 40015 between Carlisle and Wigan (via the S&C) on a railtour. In total I managed to see most of the 200-strong class, but only managed a fairly meagre total of 24 of them for haulage in service but nonetheless they were a class I quite liked. Needless to say I'd been looking forward to this tour since I first heard of it (which was quite some time ago now). Being booked in coach B also meant a good seat for about half the trip with the "whistling wonder" just a coach length or so away.

The day started for me the previous evening as I'd arranged to stay with friends in Birmingham. The plan for an early night didn't quite happen and we ended up retiring for the night at about midnight with Pete saying he'd give a knock on the door to wake me about 4.30am (we'd a lift to Crewe arranged for 5am). Considering I slept on the living room floor I had a reasonable four hours or so doss before being woken.

We arrived at Crewe just as 40145 (in green as D345) pulled in with the stock. Although the tour was starting at Birmingham New Street, tickets were sold to allow people to travel down and back on the "stock movement". Most, it seems, chose this option as the train was packed.

A little after 7am and D345 eased out of Crewe to signal the return of another class to the mainline. As we were at the back of the train we could not really judge D345's performance, timings were relatively slack too so not much need for high speed running.

Back at Crewe (by now gone 10am) and there was a half hour pause which allowed for photographs to be taken. An opportunity was also taken for the Class Forty Preservation Society (CFPS) to have a "seminar" photo of the past and present committee members who were on the train. We left Crewe with every seat taken. Despite it being a dull and wet day there were many people out to see and photograph the trains passing.

Timekeeping on the run to Holyhead was mostly reasonable. A break of nearly an hour at Llandudno Junction enabled more photographs to be taken - I have to say this was appreciated, how often these days do the tour participants get little or no chance to photograph the train that, at the end of the day, they paid to run?

Having arranged to meet up with someone who'd sent me tour gen in the past I made my way to the leading coach to meet them. We were chatting away to the background thrash of D345!

With a couple of hours to kill at Holyhead many took time to photograph D345 which ran round the train then took it into the adjacent carriage sidings for cleaning. D345 then ran off to the nearby fuelling point for a drink. I ended up at the hole-in-the-wall cash machine in the ferry terminal. First question - what language do you want....English or Welsh! I resisted the temptation to try and obtain some money with all the options in Welsh just in case I ended up signing over the balance of my account to the Welsh liberation front or suchlike!

Departing Holyhead at 16.03 those of us in standard class now had seven or so hours of thrash to look forward to - and enjoy it we certainly did. The driver we had from Chester in particular put on a very good show. Who on board will forget the thrash through Manchester Victoria station and storming up Miles Platting bank?!?

Some slack in the schedule meant we were actually ahead of time back to New Street. This continued all the way back to Crewe where the "stock movement" arrived back some 40 minutes early.

Verdict : simple really - the tour of the year!

For anyone interested, you can find out more about the CFPS and future outings for 40145 on their Website.

Timings continue in second table above.