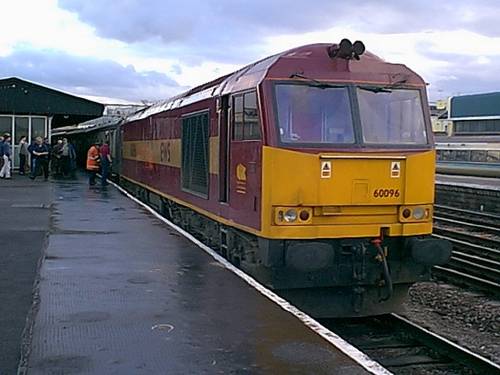 It was well over 2 months since my last railtour, with other tours I was booked on being cancelled and not running beyond Stafford, etc.  I was eagerly looking forward to the tour, seven locomotives, so surely being a novice I would score highly! A nice run to Westbury, Bristol, Gloucester and an early return to London Victoria beckoned. Early gen through the week suggest 37710 and 37890 out of Victoria. Excellent; a pair of winning heavyweights!

Saturday arrived and there was rain in the air.  Not a nice day for photographs.  I rose early to see if I could get some southern units for haulage.  Some quick bashing between Victoria and Clapham saw a few more CIG’s and VEP’s scored, not many to go now.  Arriving in Victoria close to the departure time saw a vacant platform 2.  An announcement told us the stock had been delayed on it’s journey inward and our revised departure time was 9:25, not bad only 20 minutes late.  At a quarter past, 60003 Freight Transport Association brought in the stock, and with the early gen proving correct 37890 in tatty mainline grey and 37710 in loadhaul black backed on.

20 minutes late at 9:25 we departed Victoria with both 37’s sounding in fine form. This didn’t last for long, and we were stopped on Grosvenor Bridge, as the line was set wrong! This took ten minutes to sort out, in which time 60003 had passed us on its way back to hither green.  We took the down Stewarts Lane and rounded the Battersea reversible. Only to stop again.  92026 went past on a channel tunnel freight, and then we still didn’t move.  Now the points had failed at Longhedge Jct!  After a fifteen-minute fester we were finally on the move again. We continued around the down Ludgate line through Clapham Junction and headed on the southern line towards reading.

We were now 45 minutes late, had lost our booked path and were now stuck behind stopping units and to add insult to injury we were diverted around the Hounslow loop, no thanks perhaps to the rugby international at Twickenham. We slowly lost time all the way and we departed from Reading almost an hour late, only then the 37’s were finally opened up and a fine run was had along the Berks and Hants until we reached Westbury.

Westbury was brimming with locos, the yard contained no less than eight 66’s with another couple unidentifiable. Those that were seen were 66117, 133, 091, 136, 054, 185, 235 and 207, with 60084 and 058 thrown in for good measure. Two Fragonset 31’s, 31602 and 31459 were also in the yard on a short rake of coaches for the impending Bristol to Brighton runs.  We also passed 67018 waiting in the sidings for our tour. Not the 67 everyone wanted to see, as it had hauled Past Time’s Spinnin’ State 3 back in June from Doncaster to York!  A spirited run nevertheless saw us arrive at Bristol 20 minutes before our departure time, with 60096 gleaming in EWS livery waiting at the north end of the station. As we couldn’t lose our path over the single line between Kemble and Swindon we had to depart on time, so the 60 was attached and everyone was herded onboard with no break. What a disaster!

The 60’s run was excellent and we were soon running early as we powered our way through the now gloriously sunny countryside towards Gloucester. Here we were to run into the yard for our loco change, but for some reason we ended up running into platform 4, time for photos! Thank you Mr or Mrs Signalman! A number of fully wedged voyagers were seen (poor passengers!) before 56081 was attached to the rear, now front of the train for our homeward run towards London. Leaving Gloucester the same way, we were then routed left at Standish Jct. for the run towards Swindon, with a slight wait for a first great western HST at Kemble, before a fast run down the main line. A crew change at Didcot Parkway allowed us to get the locos stabled here, 66250, 244, 106 and 145 with 60018, 37675, 682 and 692. The latter now named, I think unofficially, Didcot Depot.  We set off again down the main line but branched off just before Reading and followed this mornings route. We left the line at Theale to travel down the entire length of the Up and Down Goods loop! Here we had our final loco change for the pairing of 59204 and 66064.

We retraced our steps to Reading for our first drop off point, and then we headed back down the southern line.  The pairing being so powerful that we were constantly running on cautions to slow us down and keep us to time! Despite all the efforts of the signalmen we dived down and under Clapham Junction to re-emerge in Victoria 2 minutes early!

Overall for me this was a fantastic railtour, with varied and interesting motive power being able to stretch their legs (occasionally!). I also scored all the locos with the exception of 67018, so even more value for money! With an easy start and relatively early finish I am looking forward to the next spinnin’ state tours in 2003. If you haven’t been on one yet maybe you should consider it. 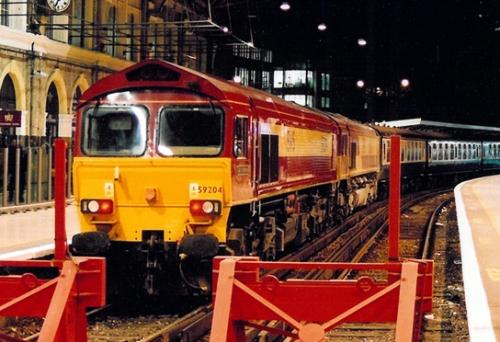 No attempt has been made to verify the mileages given.