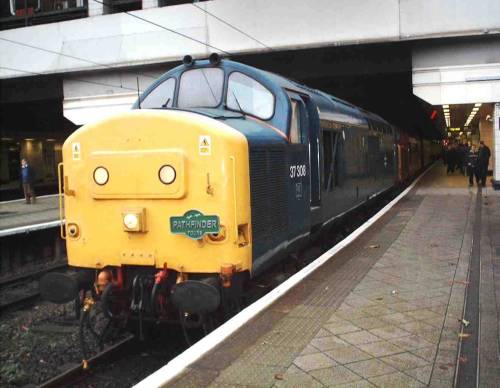 A booking originally on the Folly Filly, then moved to the PT Christmas Spinner when this tour was postponed was finally moved to the Bicester Baseline tour due to work commitments and the fact that I required the MOD track at Bicester.

So a sociable start time of 11.37 from Banbury meant that my son and I were on Banbury station in good time to see the arrival of a late running kettle-ex to Nottingham and watch the procession of plastic prior to the arrival of our tour. Is nice to see the old lower quadrant semaphores still in use at Banbury, under which Virgin Voyagers look somewhat incongruous! The thunderbird was 47767.

A few minutes early the tour arrived, 37308 leading 37057, as previously predicted on the web. On time departure and a quick thrash to Aynho Jct. And then a stagger into Oxford station. From here we shunted down to the Oxford up & down passenger loop to await the connection of 66244 to the other end. The 12:40 departure time came & went before it was announced that there was still an engineering possession on the Bicester line (groan!) So it was time to join the ever growing queue for the Real Ale bar (which was excellent as usual with approx. 7 beers available on the day!)

After a 45 minute fester were away and trundled northbound into Oxford’s up platform for a brief stop. We were then away north crossing onto the down main (required crossover for me I think!) Then left at Oxford Nth Jct. to take the Bicester line. Unfortunately as we were in the back coach from Banbury & the train turned at Bicester, we never had the 37s on our end & had to put up with the 66. Never mind.

Anyway, crossing onto the headshunt (old up line) a mile or so outside Bicester Town station, we then reversed into the MOD Exchange sidings where our EWS engines were exchanged for 2 MOD shunters 301 & 302. We were then away, trundling round the Graven Hill circuit, passing 03144 on the left. A few muttered that they required this (beast?) for haulage. Wait & see!

A rake of stored Virgin Liveried Mark 111 coaches were noted as well as various freight vehicles. An MOD employee gave a commentary whilst we were on the site which was of interest. After the Arncott circuit, we traversed the fairly long link line to cover the Graven Hill circuit. Here 50026 was seen. I believe that this is in the process of being restored. At the end of the circuit we turned right effectively turning the train and chugged back towards the Exchange sidings. At Arncott 03144 was added so we could get it in the book (maybe some had had it before?)

I was surprised at how much track there was on the site (18 miles I think!)

A nice touch is the 2 manual signalboxes and antiquated upper quadrant semaphores, although they didn’t seem to be in use on our visit.

At the Exchange Sidings the MOD shunters were swapped for the 37s on the front & the 66 at the back so that the 37s would be leading out of Padd later. So, Exchange Sidings to Headshunt, reverse, cross to down Bicester reverse, full ahead the 49 chains to Bicester London Road level crossing! After a few minutes the gates were lowered and the colour light changed to green and we trundled across the crossing, causing traffic delays and amazement to the locals! I really don’t think the Bicester to Claydon Jct. line is used much, if at all these days and certainly the Claydon Jct. to Bletchley line is now mothballed. I was last at Claydon Jct. in May 1993 on the Merry Wives (2 x 31) from Carnforth (dep. 04.40 after a night in a night-club in Morecambe!) which came in from Bletchley and then turned left at Claydon Jct. for Aylesbury & then Windsor where I baled. This time we reversed at Claydon Jct. This really is a remote spot! I was surprised to see a small cabin here to operate the jct. The original box is now at Blunsdon Station on the Swindon & Cricklade Railway.

By now we were (and had been for some time) 40 minutes down. Missing out the operational? stop at Calvert we swept past a parked “bin liner” train. The stop at Aylesbury was cut back, but we were still 30 minutes or so down. Greenford to OOC Jct. was a real stagger (don’t know why) & we arrived at Paddington  some 34 minutes down. Again, even though the turnaround was to be quick we left 30 or so down leaving the ying, ying behind. However we immediately crossed onto the down fast and expectations for a thrash were high, only to grind to a halt! Again, don’t know why. However, after a couple of minutes we were away again and experienced some excellent thrash to Reading where we crossed to the down slow and paused in the platform for a minute. Next was the haulage highlight! We were booked to stop for 9 minutes in Didcot but this was ignored as we stormed through on the avoiding lines to Nth Jct. Arriving at Oxford only some 10 minutes down from a 27 minute late departure from Reading! An excellent run! However, some of this good work was undone as we festered at Oxford station for 8 minutes. Nevertheless, a 15 minute late departure from Oxford was made up to only a  6 minute late arrival at Bicester. Good work that driver! As we walked off the station we could here the tractors growling off into the night.

Verdict- A good tour which went well given the recent difficulties. All the booked track and traction was covered so no complaints there.