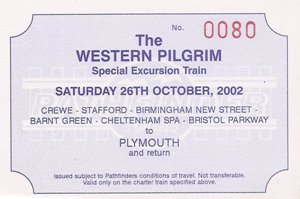 When was the last time you took a "Wizzo" over the Devon banks? In my case the answer was "never" so this was a tour not to be missed as it would have D1015 "Western Champion" very much back on "home territory" doing what it was built for.

Although a Western out of Birmingham New Street would also be a new experience, I chose to settle on a slightly later start and join at Barnt Green. I'd also tempted my Father out for this trip so it would be his first class 52 on the mainline...possibly ever. Having seats at the front of coach B, the second from the front, was excellent news as we would be this close to "Champion" all the time.

D1015 made a really nice sight rolling in with the tour. As booked, we were in the second coach, two colleagues already on board having joined at Crewe and Birmingham New Street respectively.

The run south via Worcester Shrub Hill was a bit of a totter, but the driver did manage to open up D1015 through the platform at Shrub hill which was a superb sound. A pathing stop at Abbotswood Junction didn't prevent us arriving 16 minutes early into Cheltenham Spa so there was plenty of time to socialise on the platform.

Once beyond Bristol Parkway and things livened up a little. The run round by Bath Spa proved entertaining and after Westbury "Champion" was really into top gear with quite a few miles of high speed running which was doubtless enjoyed by all passengers.

I'm sure the train made a fine sight in the sun along the Dawlish sea wall, certainly there were many photographers to record our passing. We fair stormed through Newton Abbot and despatched Dainton bank with little effort. The next stiff climb was Rattery, which starts almost immediately after passing through Totnes.

Rattery...what can I say. It was awesome!! Yes, D1015 was challenged by the steep climb, but never in any obvious danger of not winning the fight. All too soon and we'd breached the summit and began dropping down the other side (Hemerdon) towards Plymouth.

A diversion to Plymouth Friary saw 09017 added to the rear of the train and the gronk then took us round to Plymouth station itself. For some reason the 09 seemed to make very hard work of the task and we held up a FGW HST in the process. Arrival into Plymouth was about 20 minutes late. 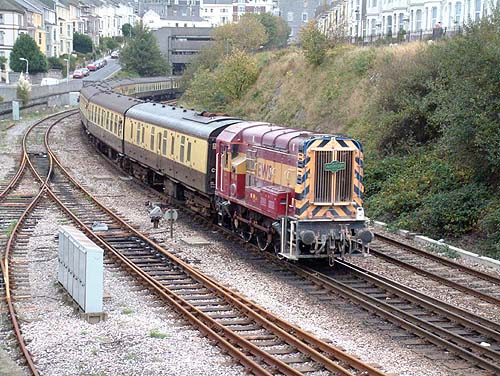 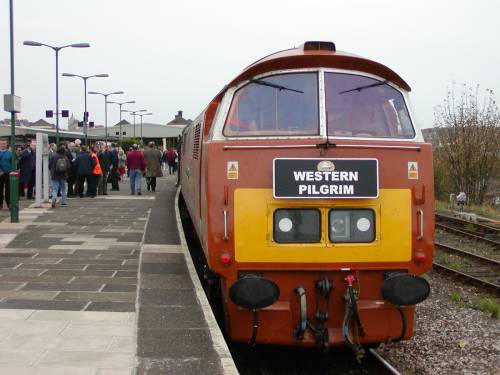 After an hour or so break D1015 blasted away from Plymouth, down the hill past Laira depot then into the attack on Hemerdon bank. Another awesome feat it was too, plenty of noise and clag yet we topped the summit at a pretty decent speed. 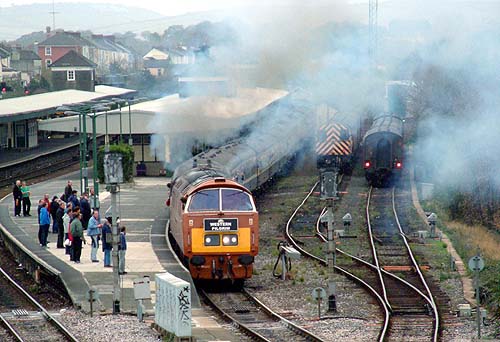 A fast run back to Bristol Temple Meads saw us arrive a couple of minutes ahead of plan. Here we said good bye to D1015 in favour of 47773 "The Queen Mother"...it was a somewhat moving experience: as D1015 powered off the stock and into the darkness the assembled crowd applauded the days performance. I think the last time I remember anything like that happening was at Kings Cross on 2nd January 1982 at the end of the "Deltic Scotsman Farewell" tour!

As we sped northwards, gaining time hand-over-fist en-route a rumour began to circulate that D1015 was already back in action, having been sent to rescue a failed FGW HST!!!! At first I thought it was just a wind-up but no it wasn't...who could have believed it, a "Western" out rescuing a failed service train in 2002?!? For the record: 1A77, the 17.10 Bristol to Paddington had failed near Wotton Bassett Junction and D1015 hauled the stricken tram to Swindon where the train was terminated. D1015 then went off light engine to Old Oak Common depot!

We left the train at Barnt Green, the train by now running over half an hour early (another unusual event in the railtour world!) and headed home very happy. Quite simply - what a superb day out it had been!