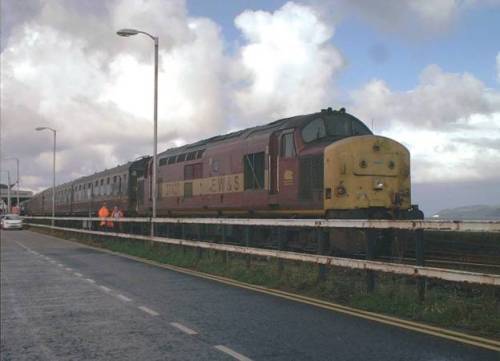 Seeing that the SRPS’s last tour of the season on the 12th of October was going to Stranraer instead of Worcester I fired the booking pretty quickly for two reasons:

I decided to join the train at Newcastle on the Saturday morning, travelling south on the 20.00 Glasgow Central – Doncaster behind 91129. 47785 was in Platform 1 with the empty sleeper stock. An uneventful run to Newcastle meant an on time arrival and produced 47776 parked in one of the bays as the Thunderbird. After meeting up with a mate, we headed through Newcastle’s nightlife to the Travelodge on the quayside.

When I left the house at 18:30 there was still no confirmation as to what the ‘Tractors’ for the train were going to be but after a process of elimination 427 and 428 appeared to be the most likely chose (This would mean that the last 4 tours I’ve been on have used 427!). We managed to catch a few hours doss before the alarm went off at 04:15…

By this time it was pouring in Tyneside which resulted in us being soaked by the time we reached the station at 05:15. No sign of the train which was booked into the station 05:10. It eventually appeared at 05:25 – our departure time - using Platform 4, not 3 which the screens displayed with 37427 leading 37428. Departure was 5 minutes late.

More time was lost en-route thanks to a wet rail, and that 427 was doing most of the work, as by the time we reached Edinburgh about 25 minutes down, a fitter was out checking over 428 which had been reported with low power. It was that 428 could continue (still on low power so I believe), although now we were stuck behind the 08:22 Edinburgh – Glasgow Central plastic service train, which checked us several times between Midcalder and Uddingston. We then took the Cyldesdale Line to Shields Junction, getting out in front of the 10:00 Ayr train thankfully, and ran via Kilwinning to Newton-On-Ayr, where we stopped for a crew change.

By this time I had wandered up to the first class end to get in a decent position for the thrash out of Ayr, where we were booked a 10 minute stop. However, we were approaching Ayr at an alarmingly fast speed for stopping, and, you’ve guessed it, we coasted straight through the station! One of the stewards then pulled the chain (not really necessary as it wasn’t an emergency) and we came to a stand just beyond Townhead Carriage Sidings. The Betty’s and Eda’s at the first class end didn’t seem to bothered that they might not get there coach trip to Culzean Castle!! After about 10 minutes permission was granted for us to propel back into Ayr station. The departure from was reasonable, however we were held at Dalrymple Junction to allow a plastic to clear the single line section. We then continued to the next loop at Kilkerran where were held to await yet another plastic. By the time we reached Girvan the rain had stopped for the first time since leaving Newcastle. The departure from here was more rateable than Ayr, once the summit was cleared, I retired to my seat in Coach K for a doss.

I woke up at Dunragit Loop, where it was decided to drop 427 off and run it round rather than sticking to the original plan. (which was to drop 427 off at Harbour Junction and put it in the Town Sidings, then for 428 to haul the train the last mile to Stranraer Harbour, with 427 running light from the sidings to drop on to the back.) This lost more time which meant that arrival in Stranraer was at 13:35, five minutes after we were suppose to depart!! The departure was retimed to 13:50, which meant there was just long enough to dive for a few photos.

37427 would never have managed on the gradients out of Stranraer with 10 MK 1’s and a dead 37428, so the ‘Scotsman’ tractor was allowed to assist from the rear, the biggest clue being the large balls of clag from above it’s exhaust outlet!! Coach K provided plenty of racket on the 1 in 57 to Glenwhilly, much to the delight of the 37 posse in it! At Barrhill we had a booked stop from 14:16 to 14:41 – we arrived at 14:35, which resulted in an early departure! Plenty of more racket followed to Ayr, where arrival was 5 minutes early. Here, 428 ran round and hooked on to 427 at the front. We had an hour’s break here, which gave plenty of time for a trip to the chippy.

Departure from Ayr was 2 minutes, followed by another stop at Newton-on-Ayr to drop the second driver off. A beast departure from here in full sunshine, we ran via Troon and took the Kilmarnock line at Barrassie Junction. We then ran via the G&SW to Carlisle, where, by the stage, the front coach was a total riot! The Tyne Valley line was then taken to Newcastle, with plenty of thrash in between. Departure from Newcastle was on time and the train quietened down as we made our way north.

Arrival back in Edinburgh, into Platform 21, was a few minutes late, thanks to being stuck behind the North Berwick plastic from Drem. The 37s ran round and removed the stock to Millerhill.