Notes:
(1) Should have run via Stewarts Lane but ran main line instead. 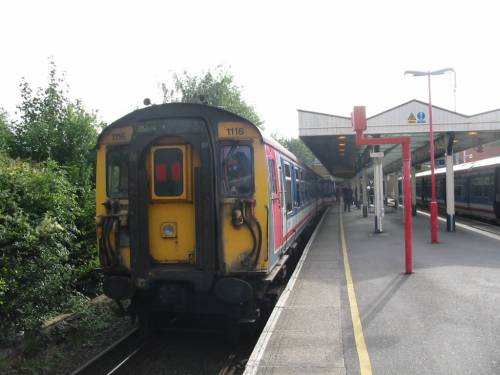 I knew nothing about this tour until I saw an item on the South East rail-gen web site the previous Tuesday. It showed that there would be a tour using a 3CEP on 21/9/02 possibly with 1105 and giving the majority of the timings. I thought I might have missed but could not find any reference to it in any magazines, so, having nothing   special arranged for the Saturday, I decided to turn up and find out more.

I went for the 0723 from Hatfield which was cancelled so got the 0732 stopper to Kings Cross (317669) and the Victoria line to Victoria. There were a few people waiting and eventually 1116 arrived. The first person asked about the trip turned out to be the organiser who said there were seats available with the fare at £10!! I haven't had such a cheap tour for many years!

We set off on time at 0908 for the first destination of Hayes via the Mid Kent which we duly accomplished without problem except that we were booked via Stewarts Lane and went via the main line instead. The mid Kent line is very rare for any type of main line stock. I have been to Hayes in a 4 CEP about 25 years ago but since the 3CEP's have only been going for a few years this was rare indeed. There did not seem to be many on the tour. At Hayes I made a quick head count. There were eighteen of us...hmmm.

It was then back up the Mid Kent line via Lewisham to London Bridge. We followed the 0950 Hayes - Cannon Street so it was a bit of a dribble.

A short turnround saw us on our way again down the Greenwich line to Slade Green this time following the 1029 Cannon Street - Dartford. We went round the Crayford Spur and up the Dartford Loop to Lee then round the Lee Spur and on to the South Eastern Main line. Incidentally all EWS's 3 remaining ED's were on Hither Green shed. Our route was then via Chislehurst, St. Mary Cray & Swanley to Sevenoaks. The signaller thought otherwise as we had the road for Maidstone East at Otford Junc. After resetting the road we set off via Bat & Ball. I have seldom gone this way on a rail tour but this was the second time in a month (see The Dungeness Pebbledasher). It was then via Tonbridge, Paddock Wood and up the very picturesque Medway Valley line to Strood. We were 6 mins early through Maidstone West so there was a lengthy wait outside Strood to allow a Gillingham - Charing Cross to go. We duly reversed here and set off for Sheerness via Chatham and the now rare Western Junc. - Middle Junc. spur.

At Sheerness there was a break of about 40 mins so I got lunch in a cafe near the station. At 1415 we departed back to Middle Junc. then to Eastern Junc. and on to Ramsgate via Margate. We were due to pass Ramsgate at 1520 without stopping but we did stop as there was a crew change. However the timing had been fairly easy so we arrived at 1506 and time for a leg stretching break on the platform. We left for Victoria via Dover, Ashford, Maidstone East & Catford just 1 min late, this time following the 1515 Ramsgate - Charing Cross (all stations to Folkestone Central) so our progress was slow with a few signal checks and we lost a few minutes to Ashford. Here there were a Freightliner 66 and 2 GB Railfreight 66's on Channel Tunnel Rail link infrastructure trains. The run up the Maidstone East line enabled us to regain all the lost time and despite stopping at St. Mary Cray to set someone down and a signal check at Bromley South we got into Victoria 7 mins. early.

I found out later the tour had been organised by a Connex manager as he expected that the 3CEP's would be withdrawn before the end of the year.

For those interested the Kings Cross - Hatfield unit home was 317668.

All distances, in miles and chains (M & C), are as given by John Clifford, no attempt has been made to verify them.