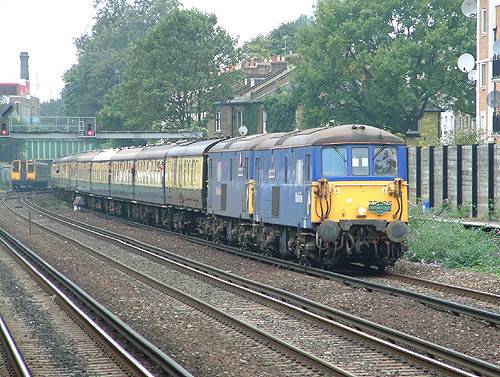 This was a railtour I was very much looking forward to featuring 2*37's, a 60, and my first pair of 73's (possibly my last, haven't got long have they?).  Barnt Green was my boarding point and as I arrived 60045 passed by on a steel train towards South Wales.  Tour rolled up 10mins early, many taking the chance for a quick pic.  Surprised to see 37/0's instead of 37/7's, but I'm not complaining! We duly departed and headed south to Cheltenham Spa arriving there over 10mins early as well, more pics being taken here.  We set off for the short ride in to Gloucester Station to lose the Beasts for a Grid, this would take us to Willesden South West Sidings via Kemble, Didcot and Reading.

Before setting off from Gloucester a quick look at the station information monitor showed '0926 Southampton calling at Swindon, WillesdenSW, Clapham Junction and Southampton.'  Since when have sidings made it on to the monitors?!! Time keeping was spot on and a bit early on this stretch with the Grid flying along, 13 bogies being no trouble for it. At Willesden SW we made a swap to now have 2*73's in charge, ready to head south in to their familiar territory. A 15min pathing stop was observed at Clapham Junction with it being as busy and fascinating as ever.  A 73 was seen out on Gatwick Express duties as well as the usual slammers eeking out their last days. Good progress was made towards Gatwick Airport, this all being new track for me behind classic Southern Traction. The Mid-Sussex Line was taken at a some what slower pace, still, we got to observe the scenery better!

The approach towards Soton was a bit bumpy with jerky acceleration and braking, memories of the Bone Breaker came flooding back! On arrival at Soton the usual rush to get a pic resulted in the SWT's man getting a bit irate and threats of a liaison with the law were made! Considering everyone aboard knew of the 3rd rail and what it can do to you, plus the fact that the platform opposite the tour which we were standing on was blocked we all thought he over-reacted just a little bit!  The same can be said a few weeks previously about the BTP at B'ham New Street as everyone tried to get pics of the last XC Class47 hauled train.  The time in Soton was whiled away by observing the non-stop movement of units, this being broken up by the passing of 60070 on a westbound gypsum train.  The stock rolled back in to the station 10mins late behind one of the two 'silver sixties'.

This made good progress gradually gaining back the time until arrival at Westbury saw us regain the mornings 37's ready for the run back north. A hellfire, thrash filled run back north saw us run pretty much to time.  I was getting ready for the climb up the Lickey Bank with its 1in 37 grade which lead to some serious fun on the 8th June Post-Festive Freighter from Bristol.  We hit the foot of the incline with the beasts going flat out but this momentum soon disappeared and a nice noisy climb began which lasted over 10mins which I reckon saw us top the summit at 20mph. Suddenly all the fun was over as Barnt Green was reached.  I stayed to listen to them roar off in to the cold, dark night with their thrash still clearly audible for some time after.  It had been a thoroughly enjoyable day with good traction and an interesting route as well.  Certainly worthy of 10/10.