Notes:
(1) 58033 on rear.
(2) 58045 on rear.
(3) 58045, leading, failed to stop on arrival at Walton-on-Naze station & collided with the buffers (at a speed reported to be less than 10mph) causing injuries to a small number of passengers on board. With the train impounded for investigation the tour was cancelled at this point and tour participants bussed to Thorpe-le-Soken for an additional service (booked 17.40 departure) to London Liverpool Street. Once in London passengers were to make their back to Ealing Broadway (via Paddington), Banbury (via  Marylebone) or Birmingham/Stafford/Crewe (via Euston) using service trains.

For reference, had the tour continued, the booked route (and anticipated motive power) onwards would have been as follows;

Source : Gary Thornton.
(only on the train between Birmingham & Banbury on the outward leg) 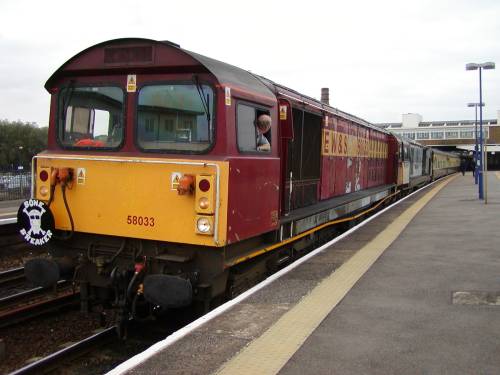 As one of the farewell tours to the Class 58 fleet it didn't strike me as a "must do it" type of tour. It was only on the Wednesday before that my interest was sparked when I realised I only needed two serviceable "bones" for haulage - 58033 & 58045. Gen about on that day was that the tour may use 58033 & 58047, but this soon changed to the pairing I would not be able to resist going for - 033 & 045! An offer of an early morning lift to get me to Birmingham was all it then took...

A reasonable sprint up the M1/A45 soon had us at the dubious location of Tile Hill where Steve's car was dumped in favour of a 323 to New Street. "Why Tile Hill?" I can hear you asking...well its free parking and Steve "required" the station for catching a train from it!

With half an hours wait at New Street we arrived to find the tour arriving shortly behind us - it had a half hour booked stop! At this stage I actually hadn't decided if I would do the whole tour or just a "short leap" to the next booked stop (at Banbury). In the end I decided the short leap was preferable - cheaper than staying on all day and I'd be home many hours earlier. Short of a loco failing or some major incident I couldn't see there being any chance of me scoring any more locos or any track all day anyway. (Webmasters note: I wrote the above paragraph before receiving a text message from a colleague on board the train informing me of the unfortunate collision with the buffer-stops at Walton-on-Naze!).

The bones staggered all the way to Banbury (it was timed 90 minutes for 34 miles) where I duly abandoned the tour.

Um, so that's my review of the tour over...sorry!

Footnote : About 45 minutes after I walked through my front door the tour arrived into Walton-on-Naze station. Unfortunately, for reasons unexplained at the time of writing this review, the train failed to stop and collided with the buffers at a speed something under 10mph. A number of people were slightly injured with one person being taken to hospital (reports say injuries included fractured ribs and a broken leg - so not the best choice of tour name in the circumstances!). 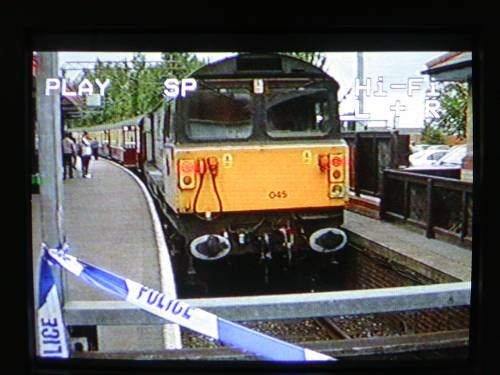 A shot captured from TV news footage - 58045 at Walton-on-Naze after the
train had been backed away from the buffers - no damage evident.

The train was impounded for investigation and, as a result, the tour was terminated. Tour participants were got home using buses to Thorpe-le-Soken, then a special train (formed of 2 x class 321 EMU's) to London Liverpool Street. Once through London service trains from London to the various joining points were used - no doubt resulting in a very late arrival back for some.

A collection of three photos from Brian Basterfield: 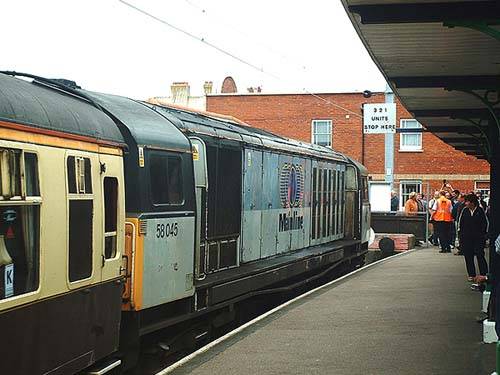 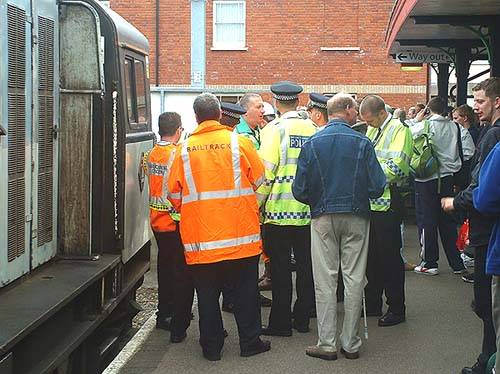 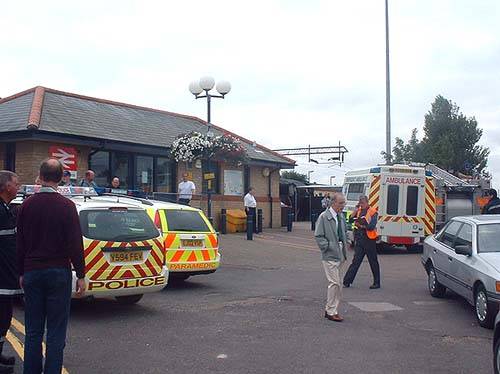 Maybe not the best tour name! 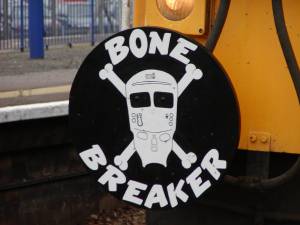 All distances, in miles and chains (M & C), are taken from the timing sheet given out on the train. No attempt has been made to verify the mileages given. The train did not proceed beyond Walton-on-Naze but the booked timings are still provided for reference.