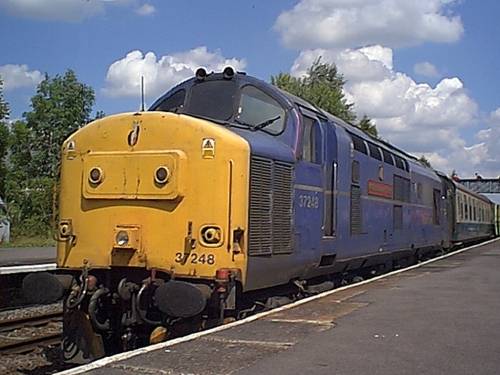 As a regular visitor to the site I'm always interested to read the reviews of the latest tours. However because of family commitments at weekends I hadn't been on a diesel railtour for almost 20 years. Then along came the various spinning tours with the general concept being a good mix of locos but more importantly to me reasonable start and finish times.

So there I was at 8:30 last Saturday (13th July) on the end of Finsbury Park Station waiting for Hertfordshire Railtour's 'Flower Arranger' part of their Spin Doctor series of tours.

About 10 minutes after the booked departure time 92022 appeared round the curve with 37248 dead in tow tucked in behind. Everyone was soon boarded and we headed north. It was soon announced that the late arrival, due to problems releasing the 92 at Wembley was going to be compounded by a later than advertised pick up at Stevenage due to the cancellation of a south bound connecting service into Stevenage. It was a good day for spotting rare classes of loco as 03179 was clearly visible at Hornsey and 89001 was tucked round the back of Bounds Green as we headed onto the Hertford loop.

We eventually reached Peterborough where both 56007 and 58024 were waiting, being the booked locos to haul the tour later in the day. 58020 was also on shed the site of two 58's at Peterborough being quite a rarity these days. By the time we reached Newark most of the time deficit had been made up. The 92 departed south and the 37 sprang into life as the train departed towards Lincoln. Almost immediately a large convoy of locos headed in the opposite direction (later confirmed as being 60062, 60028, 60071, 56071 and 56049). 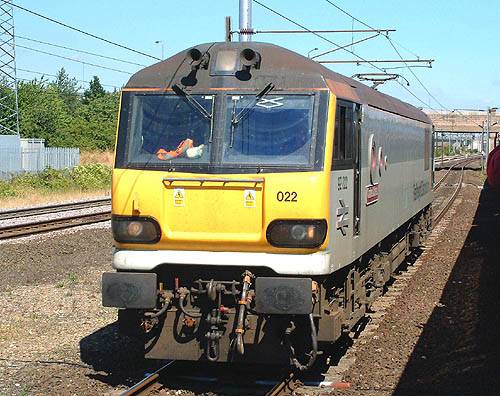 92022 after being detached from the tour at Newark (photo: Mark Sawyer)

The curves approaching Lincoln gave a good view of the 37 doing it's work with the Cathedral making an impressive backdrop. We soon left Lincoln behind and made our way towards Spalding. The cry of 'scratch' echoed through the coach as we took the Sleaford avoiding line. With approximately an hours stop at Spalding there was plenty of time to photograph the train and replenish supplies. The run into Peterborough was largely uneventful and the loco change smooth.

The only problem with the 58 part of the railtour was that the advertised photo stop at Bury St. Edmunds had been denied and therefore there was no decent opportunity to photograph the loco so I had to suffice with a few out the window shots as we rounded the few curves on our route across the fens. After a brief stop at Ipswich to pick up a crew member we soon arrived at Colchester Goods Loop. A quick walk down to first class allowed a good shot of 56007 as it waited to couple onto our train. A brief pathing stop at Witham station allowed more photos to be taken but we were soon back on our way on the final stretch of the journey. For me this was the highlight as the 56 made light work of the Great Eastern main line into London. Following a brief section over the North London line we arrived back at Finsbury park before 6:00PM which was a little ahead of schedule. 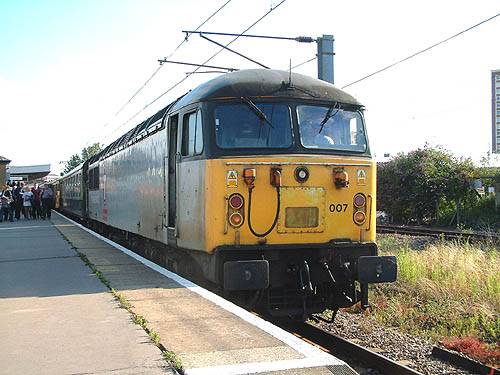 All in all an excellent day out, and for me my first haulage behind a class 92 and 58. While it was a pity that the tour didn't allow a photo stop with the 58, a real shame as there are only a few tours left with this class, I'll certainly not be waiting another 20 years for my next tour.

When Hertfordshire announced that they were going to enter the Spin and Win market, some people might have looked up and wondered what they were up to. Very clever Marketing ploy I think my Ian Kapur and John Farrow.

Today Saturday 13th July, saw the 2nd one after the first tour was on 9th June 2002 with 56006 out of Paddington. Todays tour was from Finsbury Park to Spalding via Newark NG, Lincoln, Sleaford Avoider, and returning from Spalding to Finsbury Park via Peterborough, March, East Anglia, Great Eastern, and along the North London Line to Finsbury Park.

We arrived at Finsbury Park in plenty of time to catch up with the gossip from a few work colleagues and a few friends before 92022 appeared (my first loco scratch of the day) with 37248 DIT (which caused a bit of a fuss as lots of people didn't need it).  This surprised me as the gen leading up to the day quoted 37174 as the tour loco.  Oh well, the 37 was required too.

We stormed up Stoke Bank (and not Lickey as some people in our coach commented), and passed through Grantham 16 late at 1034, and arrived at Newark North Gate at 1048 (13 late) to detach the 92 and go forward with the Class 37.

At Newark North Gate 91107 funnily enough named "Newark-on-Trent" turned up on a northbound service.  What is the anagram of Newark please? Answers on a postcard please and don't phone its just for fun.  Oh, 156403 was seen on a Lincoln to Birmingham New Street service too.

We departed Newark NG at 1101 (10 late) to head for the lovely city of Lincoln.  At Lincoln I decided to do what id always wanted to do going through Lincoln is to stick my head out the window (my head only please note) and let the normals of Lincoln look at another train going through their High Street.  The residents of Lincoln don't like all these additional trains going through, as they have to stop and wait and the 2 level crossings in the city centre.  Pity we didn't get stopped then wasn't it?

Lincoln was passed at 1127 (9 late), and we took the Great Northern Joint line down to Metheringham, Ruskington, and passed through Sleaford by means of the avoider (which I required) and arrived at Spalding at 1217 right time.

Spalding.  What is there to do in Spalding eh?  Well outside were plenty of retail outlets (we griced Safeways along with many other people noted in the shop.  Back at the train it was time for lunch.  Now according to whatever timings you had the departure time was different.  TRUST showed 1300 but the tour brochure showed 1310.  So from now on we were told to be back at 1310.

Well we departed Spalding at 1310 with evidence of the sidings that used to be there for the Spalding Flower Specials.  Hmmm, harping back to the bygone days of charters.  Well the Lincolnshire countryside was flat apart from something on fire (Note: it was noted that on ceefax Sunday morning there was a fire at Skegness Caravan Park - some coincidence?).

Well we rejoined the East Coast Main Line at Werrington Jn (1329 13 late) and headed down for Peterborough Yards.

We departed Peterborough Yard at 1349 (6 early) and headed down through the back of the station and down in to East Anglia.  The last time I came down here was on 9th March 2002 with the Spinning Staite 2 in which the fields of East Anglia were like a American Tornado.  But not today, the weather was a complete contrast from that day!!!!!!!

There was one shower however, and this occurred between Peterborough and March, which was brought about a bottle of water being sprayed over someone in our coach for doing silly things that this person is well known for (Note: he is from Retford so it says it all doesn't it?).  Ely looked superb (at 1429 8 early) and again it was a complete contrast to the Spinning Staite 2, which saw some lads playing footy and struggling to keep the ball. Here, also a Freightliner with a 57 was seen heading to Ipswich Yard.

At Chippenham Jn we were held for presumably a slow moving Anglia service, which saw us, go from being 9 early to 2 early at Bury St Edmunds. We joined the escape from Norwich line at Haughley Jn and headed south through Ipswich (1537-1539) and saw quite a few Freightliner Locos and one ex EWS 86 sat in the loco sidings.  Hmmm.

Arrival at the Colchester Goods lines was at 1601.  This is evidently quite rare track.  And this was to be the location of our final loco change of the day with 56007 coming on (worked Power Porter from Crewe to Manchester Piccadilly, and returned in the evening).  Quite a few 312s were seen in the carriage sidings, and we departed there at 1624 for the final burst of grid thrash in to Finsbury Park.  Typical, the day we all get the two end bays in a front coach we don't get any thrash at all!!!!! The train didn't reverse once!!!! Damn!!!!!!!

Well we set off down the Great Eastern Main Line making steady progress before stopping at Witham for a passing Anglia Service. We set off again at 1646 (3 late) and made good progress down before passing Shenfield (4 late), Ilford (2 late),  and finally Stratford (4 late), which caused us to miss our path over the North London Line.  We were stood at Channelsea Jn awaiting a Silverlink 313 to Richmond.  Bloomin typical!!!!!

The rest of the journey was uneventful and we passed through Canonbury Jn at 1741 (3 late) and finally arrived at Finsbury Park at 1752 (7 late on TOPS timings), and a few minutes early on Hertfordshire tour brochure timings!!!!! Well its adjustment allowance I guess.

From here we took 317662 to Stevenage, and awaited a 365 forward to Peterborough (365541), which had a few jolly Celtic Fans on it from the Queens Park Rangers vs Celtic Game.  We arrived at Peterborough at 1940 and set off to Scunthorpe in the car getting home at 2130.  A nice arrival time home off a Railtour for once!!!!!

Verdict:  A nice day out, good mix of locos and good mix of routes taken. And good company thrown in for good measure too.  Well done to all concerned as it turned out to be a faultless day throughout!!!!!

Next tour: The Ayr Liner 2 / The Ayr Receeder