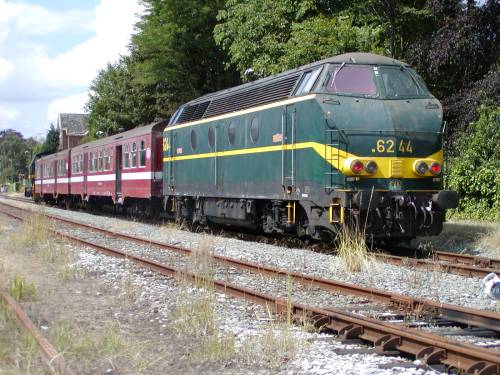 Time once again comes round for the Mercia Charters summer tours in Belgium. The format was as per previous visits, a short day tour on the Friday and a full day tour on the Saturday.

Thursday found me stopping in Gent at the same hotel as the Mercia Charters crew so a pleasant evening was spent sampling what was offer in downtown Gent. Good to hear everything was expected to go to plan - three freight branches to the north of Gent being covered.

A lazy start on Friday morning, a decent PYB (Pig Yourself Breakfast) being taken before heading over to Sint Pieters station with about half an hour to spare. Someone had already seen the tour locos, 6244 and 7349, a good choice from my perspective as they were both required for haulage.

Shortly before the train arrived it was discovered that some of the tour passengers had been held up en-route to Gent as a result of a failed train. Matt Reeves spoke to the SNCB contact and it was agreed to delay the departure about 20 minutes until said passengers arrived.

6244 rolled in ready for the on-time departure (7349 being on the rear of the two coach train) so there was plenty of time for photos before we set off.

Once the latecomers had arrived we got on our way, about 20 down as anticipated. With a quite laxly timed run we arrived at the end of the first branch, Evergem Sluis, just three late. After a photo-stop we then set off again bang on time, 7349 now in charge.

Although booked to reverse at the junction for this branch, in the event we travelled a little further on to reverse at Wondelgem station - not sure why but I guess maybe to do with pathing of the train amid the numerous freights that operate in this area.

Dud track for me now as we headed up the Terneuzen line as far as Langerbrugge where we again reversed. We now proceeded down the other side of the same river/canal inlet as we'd been alongside to Evergem Sluis. End of the line in this case being Evergem Overdam. Stopping about 50m short of the buffers the crew were soon requested to "BSK" (buffer stop kiss) and they duly obliged, stopping 7349 just a couple of metres short of the buffer stops deep in the undergrowth. After the photos were taken a cry of "seminar!" went up and 7349 almost vanished from view as loads of cranks piled onto the loco to get their photo taken.

All credit to the SNCB crew - as the location wasn't perfect for photos they moved the train back to where it was first stopped so more photos could be taken. A seminar opportunity on 6244 was also order of the day!

Was rather amusing to see a truck parked up advertising "Home Made Australian Ice Cream" - from Blankenberge in Belgium!

Back then to Langerbrugge, reverse, and southwards back as far as Gent Zeehaven yard. Continued lax timings meant we arrived early but freight traffic delayed our departure, putting us a few minutes behind again....not that anyone was that bothered.

Our destination now was Moerbeke, quite a long branch. At one stage we had to cross the main Gent ring road which caused quite a queue of traffic to build up. From there the line plunged into woods then out into the fields before finally arriving at Moerbeke. Here again the driver was whipped-up to take his loco to within a couple of metres of the buffers. Once again, after that was photographed the driver pulled forward to allow better shots of the train to be taken.

From there it was just a straight run back to Gent Sint Pieters. Good time keeping was sustained and, despite a stagger into the station, a three minute early arrival was recorded...this pleasing many who knew that loco 2130 (ex-test loco 1901) was due through just about the same time. Quite a few shot straight from our the tour to that train to scoop 2130 for haulage. Me, no need, I had it in the Thursday morning rush-hour in Brussels! I just had to head off to Namur during the evening in readiness for Saturdays tour.

Verdict : a nice relaxing day out, pleasing too that all went exactly to plan. The late start was welcomed by those who missed their connection to get to Gent and the schedule was such the late start had no lasting effect. The crew on this train deserve a vote of thanks too - previous experience has shown that foreign rail staff often do not understand what keeps UK cranks happy, the driver and guard in this case seemed very keen to learn and oblige. At one stage I was even explaining to the guard what my "required sights" and "required haulages" lists were all about! I later heard from Matt Reeves that the guard said he wanted to be guard again on the next Mercia Charters tour in the Gent area!

All distances courtesy of Stuart Clarke.
No attempt has been made to verify the distances given. A correction needs to be made for the reversal at Wondelgem rather than Y Zuid Everstein.