Sources : Alan Costello (on the train throughout) & Scott Spencer 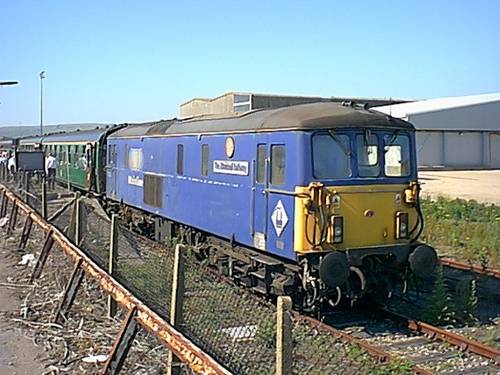 After the Grid Thrash of the Hop'n'stop I said to David Russell "there will be no more thrash off anything for the next two weeks" And so I thought until the Boeing 747 (9V-SPP) pilot stood us on the runway and suddenly we were on full throttle and the plane just flew like a bird.  This led me to be in Australia for two weeks.  I arrived back in the UK on Wednesday 29th May, and so two days later it was back to railtouring and what seemed on paper a nice little trip to Folkestone Harbour and Newhaven Marine two lines may be threatened with closure.  Folkestone Harbour, a bit of dejavu from 3 weeks ago perhaps?

With the start being from Victoria at 0855, we had to take the car to Cockfosters (for which we have only had one tour go well since we started parking there) and left Scunthorpe at 0400, before taking the tube from Cockfosters to Kings Cross, for a further tube to Oxford Circus.  Here, preparations were shown for the Jubilee celebrations that were to take over the UK Bank Holiday weekend.  Regent Street looked superb with quite a few different flags out of the shops. We walked down to Marble Arch for a further bus forward, with the police starting to set up roadblocks again for the Jubilee Celebrations.  So we got to Victoria, saw some units, bought an aircraft mag (the only reason was that it had an Article on Singapore Airlines), and then waited for the ECS to arrive.

The stock arrived with 73133 at the buffers, and 66019 at the London End. With only 3 73s left, and they are not required for me, it was clear that I wouldn't score the 73 for haulage, but I require 66019 so one loco isn't bad.  We found that our coach was the front one.  So we had the Shed thrash for the day.  Nice eh! Well the final person of our party turned up, and we settled down for a day of Southern Route Learning.  Well from my perspective anyway!!!!!!  This was in addition to talking quite a bit about Australia 2002.

We departed Victoria at 0855 and headed south East via Voltaire Road Jn, Denmark Hill, Nunhead, Shortlands Jn, Bickley Jn and took the line down to Maidstone East passing Beechbrook Farm, but before that the train was looped at Lenham (which some BLS members would have been quite happy!!!!!).  On the approach to Ashford lots of Channel Tunnel Building works were seen, and this is going to be one impressive high-speed line.

We passed Ashford 3 early at 1027, with a few units seen in the station along with a Eurostar and a DEMU.  Soon after Sandling, Dollands Moor Sidings and the Loco Holding Sidings were seen with numerous 66s and 92s. We took continental Jn at 1038 (4 early) and then went down to Folkestone Central and went down to the reversing sidings at Folkestone East from 1046-1053.  Again like the Hop'n'stop the 73 was to take us down the branch. This was supposed to be the final train down the branch, with no more trains booked down the Folkestone Branch.  We arrived at 1059, and the sun had his hat on, and the heat meant that we nearly had to have our hats on too!  We had a good walk around the harbour and admired the view.  It was a very scenic place and made me wonder why lines such as this have few trains or don't survive (Ardrossan Harbour, Heysham, New Holland Pier, Dover Western Docks, Newhaven Marine and Folkestone Harbour).

Hertfordshire had arranged with EWS, Railtrack and RCS to be able to take a extra run up the branch with the 66 and 73 to allow the photographers the chance to photograph a train up the branch.  Now many operators do that? I thought it was a great idea, but I did this extra run departing Folkestone Harbour at 1200 and took the incline and arrived at the reversing sidings at 1208 with the 66 proving it was more than capable of getting up the steep incline.  A quick turnaround saw us depart at 1217, and it was basically downhill back to the Harbour to pick up the passengers who had photographed the train.

The passengers boarded, and the tour departed Folkestone Harbour (for what may be the final train out of there) at 1232.  We reversed at the berthing sidings between 1237 / 1241.  The 73 was to work the train now down to Newhaven Harbour some long distance mileage with the ED then!  The route down to Newhaven was via a different way than what we came down to Folkestone Harbour with.  We passed continental Jn, Sandling and passed through Ashford and took the Tonbridge, Sevenoaks (which is barred to Class 4 trains due to Sevenoaks tunnel), Orpington at 1353 7 early, and continued on to Petts Wood, Shortlands, Nunhead, Wandsworth Road for a 2 minute crew stop, Factory Jn (12 mins early) before we got stopped at Pouparts Junction to await a path down to East Croydon.  We were held there for 19minutes and brought back memories of Longhedge Jn and the Urban Suburban Railtour a few years back with 73105 / 73110.  The journey down to East Croydon was slow due to pathing congestion and well slow moving trains!

We continued down to Stoats Nest Jn and took the route down to Redhill where a brief stop was made for crew purposes and we carried on to Horley, Gatwick Airport, Three Bridges (where we waved at my sisters house), and also where numerous Virgin Shops and Supermarkets were stabled (well ok 220s and 221s for the cranks).  No doubt at Gatwick Airport there would have been a few other Virgin vehicles but these being 747s!!!!!

The train departed the Brighton Main Line and we headed South To Lewes, and forward down to Newhaven Town, Newhaven Harbour and down to Newhaven Marine (1620 6 late).  This is another branch that cannot be safe, it has one train a day, but that is normally cancelled.  So this branch cannot be guaranteed a future, the only time it did become useful, was when the Seaford branch from Newhaven was cancelled due to Engineering work, and all trains were terminated at Newhaven Marine!  So some use then!

We alighted and took a good look around the Quayside (the great old traditional quay station), and took a walk down to the buffer stops (literally) taking some friends with me for the BLS move!!!!!  This was splendid along with the weather made it a really good day.  And rule Britannia!  Ah, Brisbane remembered.  They didn't have trains like ours you know!

The train was slightly delayed due to some points problems in the station area, but we were able to depart 9 late at 1659.  Some people in my party still require Seaford to Newhaven Harbour.  Well I did that on an all line rover with a friend.  A marvellous day! Although I cannot remember much about the branch!  The return journey back to Victoria was via Gatwick Airport, East Croydon, Crystal Palace, Tulse Hill, Hither Green, and back in to Victoria from Voltaire Road Jn.

However, the return journey did have some problems, after waving to my sister at Three Bridges again (she works for Virgin Atlantic) we saw Gatwick Express trains on the slow lines outside Gatwick Airport.  All down trains were using the Down Slow and as we passed Redhill some Gatwick Express services were using the down slow.  It transpires that there were problems with the infrastructure (signal / points) which resulted in down trains using the slow lines.  BLS eat your heart out!  The return from East Croydon took us through Norwood Yard, Norwood Jn, and by Tulse Hill we were 5 late, Herne Hill 5 late, Brixton 6 late, Voltaire Road Jn 6 late, but arrived at Victoria bang on time at 1844!!!!!!!  But if you took notice of the Hertfordshire brochures you would have been running early! Time had appeared from nowhere!

After the tour we made our way back to Cockfosters, but the tubes were packed with tourists, Americans and Australians (a lovely country with lovely people). Although the tube was full, there was a lot to see with bits sticking out in certain places.  However, we got to Finsbury Park and the tubes were even more packed!!!!!  We finally rolled in to Cockfosters at 1930, and departed out the car park and set off home looking forward to the Jubilee events to come.  Memories of other tours came flooding back as we passed the petrol station, and arrived back in Scunthorpe at 2230, and I went straight to bed still struggling from Jet Lag!!!!

Verdict:
A nice little tour having just come back from Australia for two weeks.  So, it was nice to have a little jaunt around the Kent Countryside scoring 66019 and Newhaven Marine track.  And nice to get down to Folkestone Harbour again too! But one thing more after this weekend...