Notes:
(1) Plus 31106 dead-in-tow. This day was 31106’s first outing on the main line as a Fragonset loco, however it failed before departure from Carnforth on the ECS for the tour, with what later transpired to be a fault with a power relay. That tour therefore ran with just the 33 working on the outward journey. The problem was fixed for the return by borrowing a relay from the same loco’s vacuum brake system, the stock being dual braked. The Green Express Railtours tour, running the same day, experienced problems with 31602 leaking considerable amounts of fuel. It was refuelled at Craigentinny for the journey south, but lost the last of its diesel approaching Oxenholme. 31452 struggled on alone to the outskirts of Lancaster, but failed with the effort of dragging 11 coaches plus its dead sister, and coasted into the station. With both engines complete failures, an alternative was sought. The Preston standby, a RES 47, was sent north, but on arrival it was realised that the loco was air only, whilst the stock was vac only! It was then decided to use the 31+33 combination off this tour, which was, by this time, almost at the end of its return journey. However, because the vacuum brake system was now inoperative on 31106,  both locos and stock were used to form the Green Express tour forward from Lancaster, passengers transferring from one platform and set to another. That train was eventually terminated at Blackburn, as by that stage a booked engineering possession had been taken on the route ahead. Passengers for stations to Brighouse were taken home by a fleet of hastily-arranged buses and taxis, the stock returning ECS to Ribble Jn (Preston) to stable overnight.

Sources : Richard Hughes (on the train throughout) & Mark Sutton 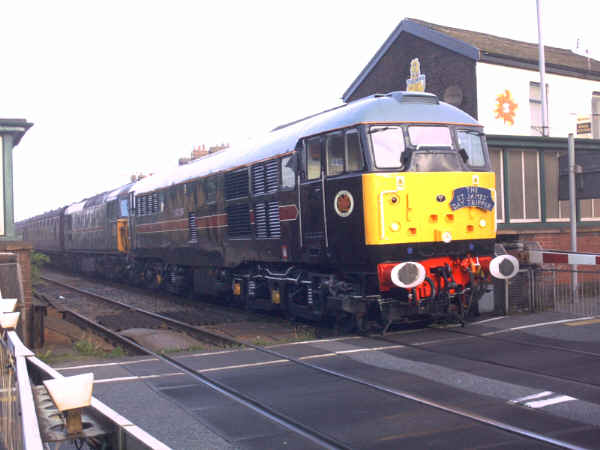 Not having had any Class 31 haulage for some time, the news that an excursion from Preston to the Spalding Flower Show would be hauled by a pair of goyles was all the excuse I needed to make a booking for myself and a friend, especially as the gen was that 31106 would be one of the locos. Not a required engine, but a low mileage example for both of us. As ever, nothing is guaranteed, though, and the pair of 31s turned into one 31 and one 33, both from the Fragonset fleet. No matter, I like 33s as well, fortunately, as it turned out...

I arrived at Preston in good time, to find the train standing in platform 5 with 31106 and 33108 basking in the early morning sunshine, and posing for numerous photographers. Meanwhile, a Euston train departed behind an 87, and then 20315 + 20310 whistled northbound through platform 3 on a short nuclear flask train, and a little while later a second Fragonset-hauled excursion arrived from Lancaster, heading for Edinburgh, via the Calder Valley, like our train. In fact, the timings letter from St. James Day Tripper had, written on the bottom in red capitals, "PLEASE NOTE THERE IS ANOTHER EXCURSION TRAIN RUNNING..... MAKE SURE YOU DO NOT BOARD 'THE GREEN EXPRESS'". Well I suppose some people could get confused! Anyway, 31452 + 31602 stormed out of Preston with the Edinburgh train, and I then wandered off to find my seat in coach K of the Spalding train. Unfortunately, the rear coach; even more unfortunately, the only air-con in the rake.

Departure time came, and the train edged forward.... and stopped. A few minutes later we tried again, properly this time, but it soon became apparent that all was not well. From the rear coach, I could hear a 33 thrashing, but not a 31. I soon learnt that there was an electrical fault preventing 31106 from doing anything more than idle, although there seemed to be no problem with controlling 33108 from the cab of the 31, which was leading. We took the East Lancs line at Farington Curve Jn, and stopped at Bamber Bridge, where I was joined by my friend, and then continued eastwards. This line has some sharp gradients, which naturally kept speed down for a single 33 hauling well over 400 tons, but there was some sprightly running on the downhill bits, and a very slack schedule helped matters considerably. Stopping at several East Lancs stations, the train soon filled up, and was apparently fully booked.

The climb to Copy Pit was certainly an effort, but 33108 took it all in its stride, and before long we were drifting along the Calder Valley. Healy Mills had a few engines visible, but only 47475, 56006 and 66114 could be identified. Turning right after Wakefield Kirkgate, we joined the ECML at Hare Park Jn and ran into Doncaster, where 56063 was standing with an Enterprise freight. After a brief stop, we continued south, and took the Gainsborough line after Decoy Yard. From here on, with few gradients to tax the engine, progress was steady but rather dull. The only real interest for me was the short Sleaford avoiding line, which I required... in this direction only! Which was lucky, because the northbound line has been OOU for some years, and is rapidly disappearing into the undergrowth in places.

Not long afterwards, we arrived at Spalding, almost on time. There was a booked 15 minute pause here, during which 31106 was to be named, by a local dignitary. Howard Johnston, the loco's owner, hails from the town, and wanted his pride-and-joy to be named "Spalding Town". This must have been the quickest naming ceremony ever, as by the time I'd wandered up to the front, it was all over. Never mind, I'd seen the nameplates hours earlier at Preston, as no attempt had been made to cover them. As most passengers seemed to have detrained at Spalding, my mate included, I found an empty bay and stayed near the front for the rest of the run into Peterborough. Checks north of the station caused a slightly late arrival, but still plenty of time for a wander round town.

I used up some of the time in Peterborough looking at cameras, to replace the one I had very cleverly managed to lose in Koeln Hbf at Easter, a rather expensive trick which I'd rather not repeat. I found a camera shop down a side road which supplied what I wanted, and returned to the station with an hour or so to spare. The excursion stock was stabled south of the station, and the engines were to the north. After a while, the locos came slowly through, but as they coasted by, I couldn't tell if 31106 was doing anything other than idling. Had it been fixed? A few minutes before departure time, the ECS started to move from the sidings... with both engines clearly powering! The stock arrived in the platform, the passengers boarded, and we departed on time, with 31 thrash in evidence at last, albeit accompanied by something of a smokescreen from the goyle as it blew out the cobwebs!

Picking up the flower spotters at Spalding, we progressed merrily along, retracing the outward route, apart from the minor difference of running through Sleaford station instead of the avoiding line. With both engines now working, and an even slacker schedule than earlier, there was little incentive to thrash the engines, so I settled back for a while. There were severe signal checks before Doncaster, but we were still slightly early leaving. I decided to decamp to the vestibule around this point, to sample the thrash properly. 37248 and 56074 were just north of the station on engineering duties, and we passed slowly by, before opening up. We were stopped at South Kirkby Jn for 5 minutes to allow a VXC HST ahead, 43123 and 43102, before continuing, and shortly afterwards 47746 passed by dragging a Leeds-KX train, and then 56018 hauling a train of rails south of Wakefield. And at Healy Mills, 56006 was seen again, this time standing at the head of a Stalybridge - Immingham tank train. We now had a clear run, with some fast running easily gaining on the schedule. Once past Copy Pit summit, the hard work was mostly over, and we coasted down towards Burnley. At Gannow Jn, about 15 minutes early, Preston Power Box decided it would be a good idea to hold us for 12 minutes to allow a Colne - Preston stopper ahead, but the easy timings meant we were more-or-less on time the rest of the way, until a 5 minute signal stop before Preston put us 2 minutes adrift.

An enjoyable day out, not too ambitious, but slightly disappointing to lose the 31 mileage on the outward run. The Green Express trip to Edinburgh would have give me considerably more 31-miles, but over more familiar routes. And what of that train anyway? We should have passed it shortly before Blackburn as it retraced its earlier route after having run south along the WCML. Well... it had failed, both engines. Last I heard, before I caught my Blackpool connection at Preston at 22.05, it was still motionless at Lancaster, more than two hours after it should have left. Looks like I made the right decision after all....