Notes:
(1) Correct routing was from London Waterloo to West London Junction via Down Sheepcote Curve diversion via Herne Hill was due to ‘Signalling error’ although no confirmation of this was said.  Acton Down goods was missed for no given reason.  Reversal at Slough Estates was not allowed due to the state of the track. Reversal was to have occurred at Shenfield EMU sidings but due to late running was cut to Shenfield station.

LASERman comments: Regarding the 'Signalling error' mentioned I recall that the train was given the incorrect route at Nine Elms Jn. and did not stop until some way past the junction signal. Because of the distance travelled on wrong route it was not possible to set back as the following train was too close. Only way out of the problem without excessive delay was to continue forward via the shortest route possible to regain the correct route. Can't add much to the very detailed report as only travelled on the train from Stratford (on return run) to Norwood Jn. other than this is believed to the only passenger train that has ever covered the Down Main Slow line - Up St. Helier line - Down St. Helier line crossovers at Wimbledon West Jn. (normally only used by ECS movements from Wimbledon Park depot to Selhurst/Chart Leacon/Stewarts Lane) and the return route to Hastings was arranged to specifically cover this after a BLS member had noted that this was now shown as a separate bit of red ink in the then latest Baker Rail Atlas. 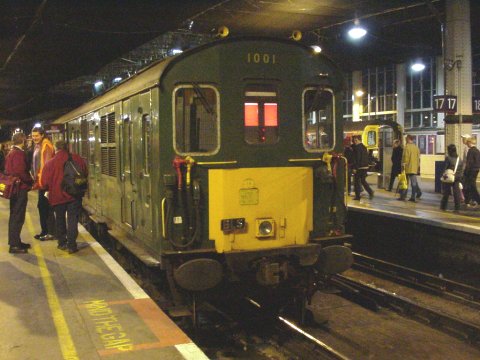 Having been invited by a good friend to sample a trip on the Hastings unit, a chance presented itself with the "Western - Essex Explorer", a follow-up tour to last year's BLS jaunt, The Sussex - Essex Express - which although covering unusual lines in the London area, lead to some dissatisfaction in that certain elements of the tour were lacking on the exploratory track bashing front - hence a re-run in today's excursion.

I had arranged to stay over locally, but the start at Hastings was still at a rather ungodly 06:07. However on arrival at the station, our steed for the day sat in Platform 3, waiting for the off. What with Connex's 3-car "Thumpers" in the other platforms, the scene proved quite atmospheric.

Promptly, we were off on our travels - the cold and misty start boding well for the weather for the rest of the day - just glorious!!. We reversed at Eastbourne and continued via Lewes (where frost lay thick on the ground !!) and Keymer Junction to Three Bridges (where several of Virgin's new Voyager units were glimpsed) and on to Gatport Airwick, here was espied a Class 460 unit. Our onward journey through the North Downs was via the Quarry line. Our next stop was at East Croydon, where the train filled up significantly - many people having travelled via Paddington to see the Western off to Devon earlier that day. We continued via ... read Daniel's most comprehensive report !! (I'm off to work out the mileages)

The BLS is renowned for going ‘off-track’ to score little bits of loops and sidings here and there.  This was a major tour using the preserved Hastings unit 1001, focusing on lines around the GW and Eastern lines. I apologise if the report is detailed and complex, but this was the very nature of the tour!

I awoke to a bright and sunny morning, and I caught a bus from my home to East Croydon station.  Some familiar faces were seen as a congregation formed on platform 3 & 4 as no one knew of our train.  The TV screens showing nothing but the regular services.  73201 stormed through on a Gatwick Express service, it’s ex-Broadlands nameplate clearly visible in outline as well as the two shields.  Out of the haze to the south, an unfamiliar shape emerged and the sound of diesel engines grew louder.  As we thought the Hastings DMU pulled into platform 4 and the now rather large gathering clambered on board.  Our 13-hour epic aboard this rush hour unit had begun.  We pulled out of the station and headed over the flyover and down the other side, passing Selhurst depot and then Norwood Junction as we branched left towards Crystal Palace.  The unit now opened up and being in power car ‘Hastings’ the noise was quite loud.  A brief pause at Herne Hill as we waited on a networker then we followed it, but only as far as Linford Street Junction where we turned right over the Eurostar flyover and into platform 15 at Waterloo.

Most passengers boarded here and after the usual photos the train left and headed towards the GW line.  Progress out of Waterloo was slow and then rather surprisingly we found ourselves rising up and going back over the flyover!  Puzzled faces everywhere as I was looking forward to traversing the Sheepcote lane curve, obviously not now! No one was quite sure where we were going! In the end we followed our inward route but at Tulse Hill took the Up Leigham Spur, ran through Balham and past Clapham Junction where we rejoined our booked route at Latchmere Junction although now almost half an hour late.

Passing Willesden depot GBRf 66702 and 707 were seen along with an unidentified Freightliner 66.  We then turned right at Acton Wells Signal box and down Acton bank, here we should have gone through Acton Down Goods, but no, we joined the main line and entered Ealing Broadway, our final pick-up point.

This was not the best start to my first BLS railtour.  Two pieces of track missed out, how many more were to follow?  The run up the GW mainline was fast and our arrival at Slough was one minute early, but here we waited for the signalman to run us into the loop.  We eventually got the right of way and stumbled down the line, only we didn’t actually run on the Slough estates lines.  We ran to the limit but on the up goods loop, the estates track being deemed unfit for passenger use, and to be fair there was more rust than track! So now just three bits of track missed.  Now the run back towards London involved doing every loop and goods line on the way, except Hayes.  This was duly covered, Langley up loop, Iver up goods, Dawley UGL, Hanwell Bridge up goods, and line 1 at Hanwell Junction. Langley loop was almost missed out, as the signalman had us running main line, thankfully our driver stopped and corrected him! 58029 being in Hayes loop which was why it wasn’t covered.  We then went main line until Friars junction where we branched off.  We covered the entire reception line 1, then carriage line 2 stopping at the washer platform for our short path along the main line, branching off again for the run to royal oak headshunt.

Reversal here saw us return along the same sidings in the headshunt before again waiting at the washer platform this time carriage line 1. We then proceeded through the washer line; reception line 1 then took the Wycombe line at old oak common west junction. A short journey here saw us take the east curve at Greenford before running through Ealing Broadway and then taking the Up Goods line at Acton Yard.  Straight up Acton bank before again turning left on the freight only cricklewood line 60028 passing us at Acton Canal Wharf.  At Neasden Junction we took the very rare Neasden curve to join the Marylebone line. After a reversal just after West Ruislip station we headed back towards Greenford and here we stopped just short of the junction.  Again a wrongly set signal delayed our progress back towards London, and another set wrongly delayed our progress at Drayton Green Junction before we did the west loop and a reversal in the Hanwell Bridge up goods loop.  Passing once again through Ealing Broadway, this time we entered Acton Yard on the up reception no.1 line, for a crew change.  60046, 60032 and some unidentified 66’s and 59/2’s were on the depot.  Finally after spending more than 4 hours we left GW territory and headed over the north London line towards the Great Eastern.

We followed the north London line until we branched off on carpenters road curve and headed towards Bow.  Here we stopped again.  The driver (and the instructions) stated a reversal at Bow yard, but the signalman wouldn’t let us beyond the yard entrance signal. Another delay, in a day of incorrect signals causing delays! Eventually we reversed at the signal and went through line 1 at Thornton fields all the way through the undergrowth to the headshunt! Reversing at the same points we headed through Stratford and up the main line.  We took the passenger avoiding line after Manor Park before heading right through the middle of Ilford depot (line 16).  Ilford’s depot pilot 08527 and 33103 were on show.  A speedy trip north saw us straight through platform 5 at Shenfield and the short loop to join the mainline for the run to Chelmsford.  We were signalled into Ingatestone loop to allow 170203 and 205 then 321323 through.  After passing through Chelmsford we took the line down to the goods yard, stopping short of the trailing points on line 4.  A quick reversal saw us heading back towards Shenfield.  Here we were told we were now stopping in the platform not doing the EMU sidings due to late running.  We were 13 minutes late.  On some railtours I’ve been on recently, 13 minutes is considered running early! Why did we miss out on the sidings due to 13 minutes?  Even the driver of the train shook his head as he headed towards the opposite end of the train at Shenfield.  We then took the Southend loop onto the down Southend line.  Again we went through the washer and stopped on line 3, then we began our journey back!  Thanks to not doing the Shenfield sidings we were now running on time and the run back down the GE mainline was quick, after Ilford we took the up passenger avoiding line and up goods independent round the back of Manor Park station.  A brief stop at Stratford and another run along the busy north London line.  Another stop at Camden Road to pick up a pilotman saw us continue through Primrose hill and onto the West Coast Main Line.  Here we were signalled through the Kilburn Up & Down goods loop.  66553 was seen at Willesden as we crossed over onto the West London line and after another set down at Acton central took the east curve at Kew for the run on the Windsor slow lines.  We took the windsor reversible line after passing through Clapham junction and arrived early into platform 16 at Waterloo.  After another short break we reversed through Clapham and headed towards Wimbledon, where we took the line towards Sutton crossing over the busy local lines onto the down St Helier.  Passing through Sutton we headed towards West Croydon taking the up Wallington before crossing over for our reversal at Norwood Junction.  We headed back on the down London bridge slow before our arrival at East Croydon.

The Hastings unit made a magnificent departure from East Croydon, thumping into the distance as everyone, now very weary made their way home.

Overall a very satisfactory railtour, the major omissions at Sheepcote lane, Acton down goods, and Shenfield letting it down, although the track covered was excellent.  Would I do another BLS railtour?  If the price and track was right, then probably.

Distances (in miles & chains) are courtesy of Phil Pearson. No attempt has been made to check their accuracy.