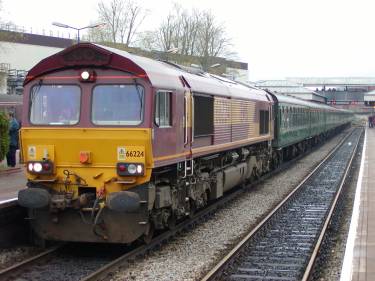 Another day of Yinging around! 66224 at Aylesbury.

This tour was definitely one for the track bashers rather than those after locos (unless they were into sheds and non-Railtrack traction). A relatively short day out the train was booked to traverse parts of the Ministry of Defence railway at Bicester. Just for a change a group of us decided to splash-out and we booked the dining option (to various comments from others we knew on the train...).

08:00 Sunday morning - the Yorkshire contingent turned up on my doorstep in Northampton, cursing the fact the clocks had gone forward so they'd not had much sleep overnight. Time for a coffee then onwards to London, choosing to park at Paddington station itself rather than mucking about parking on the outskirts and catching a tube in. Advance gen told us the locos were 66198 & 66224, another two winners for me. The train turned up at about 10:45 and we boarded to find our table already set-out ready in coach C. 66224 led out of Paddington and we enjoyed "coffee and pastries" (actually pastry, singular) on our was westwards.

Slack timings meant an early arrival into Didcot, the only other pick-up point. Coming back a different route made this a strange place to pick-up but nonetheless it seemed popular with quite a few boarding there!

After Oxford we turned right and took the line to Bicester. Just before Bicester Town we came off the line into a shunt neck from which we reversed back into the exchange sidings at the entrance to MoD Bicester. Here we swapped our "yings" for a pair of MoD shunters, 271 "Storeman" and 275 "Sapper". As the change took place we were cautioned on what could, and couldn't, be photographed during our trip in the MoD facility.

For the next couple of hours we toured the railway system - essentially two complete circular loops joined by a single line. The whole railway system is given as being about 40 miles long, I'm not sure how far we actually travelled but the loops were each a few miles long and the link line is a couple of miles too. I'd guess in all we travelled around 10 to 15 miles of the system. 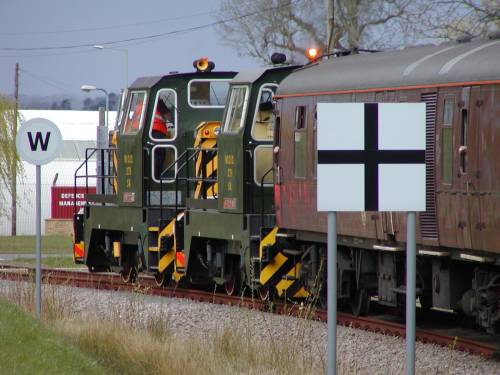 275 leads 271 around the Graven Hill loop on the MoD Bicester railway.

Highlight for some was the sight of 03144 which is now numbered MoD 2144 and named "Western Waggoner" for use on this railway network. Seemed a lost opportunity however as many on board would have appreciated having it for haulage, but alas it was not to be. For others the highlight was probably the sight of 50026, partly under tarpaulin, at the rail workshops at Arncott.

Looking back along the train it was unusual to find when we had swapped the sheds for the MoD shunters we had also gained a goods brake van on the rear! I assume this was to allow a member of staff to ride in the rear to shut the various gates we passed through as we went from secure areas to unsecure ones.

Back at Graven Hill sorting sidings and our main meal arrived. For the record, over the next two hours those of us at the posh end enjoyed;

Phew, this was hard work...but someone had to do it!!!

Whilst all this was going on a farce unfortunately developed - we swapped back to our 66's but couldn't leave as the mainline was still under an engineering possession. By the time this cleared we were approaching 30 minutes down. We then headed to Claydon L & NE Junction where we reversed to head for Aylesbury. Passing through Quainton Road we viewed GWR 7715 and a dubious rail-mounted traction engine working trains at the preservation site.

The meal finished as we approached Aylesbury. Bad news however as we'd missed our path over the line to Princes Risborough so we had an enforced wait here. At least it gave the one reasonable opportunity all day to photograph the train! Various Railtrack "bubble cars" stabled in the station and on the depot were also photographed during the wait.

We finally left just a couple of minutes shy of an hour late. A mix of fast and slow running saw this reduced to a 39 minute late arrival back into Paddington and the end of a pleasant day out. Doing the dining option certainly added to our enjoyment of the day as we simply ate our way through the delays!! 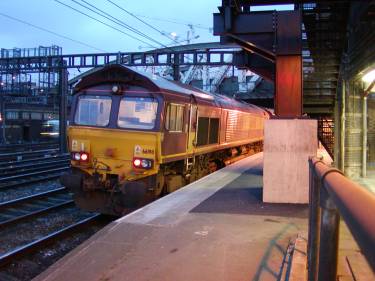 66198 back at Paddington, at the rear of the train.
Did anyone else actually photograph this loco on the day?

Distances, in miles and chains (M & C), are taken from the timing sheet given out on the train. No attempt has been made to verify the mileages given.