Notes :
(1) 66145 on rear.
(2) 37038 + 37197 on rear.
(3) was booked to reverse at Derby then go via Long Eaton, Trent & Toton Centre to Chesterfield, but early running meant the train arrived before an engineering blockade was put into effect, thus the direct route was taken instead. 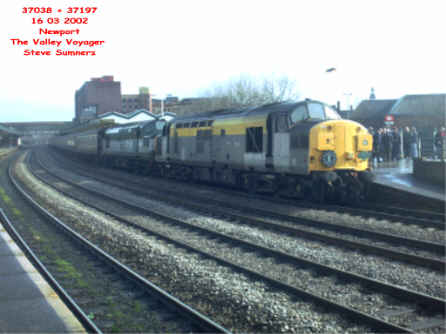 A chance to get 37 haulage along two 'required' branches made this trip a must for me. Mark who had just returned back from Spain also wanted to do it. (He reckons he was out there studying, but check his rail atlas and you'll find hundreds of miles of track highlighted).

Living in Surrey and Kent and wanting to get the most mileage possible from the 37's we caught our respective last units to London, arriving just after midnight, then making our way across London via a crazy detour of all night shops and tube stations we reached Paddington at approx 02.30. A welcome chance to sit for a few minutes followed before heading north at 'stupid o'clock' on the 03.25 Thames Turbo, connecting into the 04.50 VXC from Reading. 47841 made it to New Street on time at 07.38. Time for breakfast and a much needed caffeine fix before heading down to platform level to board the tour. 37038 + 37197 (both required) arrived a couple of  minutes ahead of time resulting in a quick chance for a photo. The 'over-warm' Mark 1 knocked us straight to sleep and so missing some impressive thrash. After many short spells of sleep I decided I needed something to really keep myself up, otherwise the day would be wasted and It might aswell have been a 66 on the front.

So I headed for the window and experienced two mighty 37's shake the walls of the Severn Tunnel. A nice welcome to Wales, and just for a change it wasn't raining. Some very slack timings and some impressive running saw us into Newport some 25 minutes ahead of time, allowing plenty of chance for photos in the partial sunshine. Back on board and Mark was soon asleep again. A fairly non-eventful run to Margam followed, where I got a couple of photos of stored 20059 and 20168 along with several new-order 66's. Passing Briton Ferry, 60018 on a coiled steel service, was held on the main lines for us to proceed in front of it along the Swansea District Line. At Burrows Sidings the 37's ran round and 66145 (another required loco) was attached to the rear. (The reason for this was to have the 37's at the front end for the steep climbs up both freight branches, and allowing the 66 to 'roll' the train back downhill). Even more thrash was produced and still Mark slept. The locals en-route were out in force to observe our passing up and down the branches. Reaching the top of each branch I secretly cheered to myself. The reason being because back in 1995 I had booked on HRT's Welsh Rarebit tour and failed to wake after a heavy night prior to the tour. To this day I have still not managed to reach Baglan Bay. Oh well never mind............

Having now 'highlighted' the branches I decided it was my turn to get some sleep, but Mark was now fully awake and decided it was time for the beer to start. Oh well who needs sleep anyway. Once back down to Burrows Sidings the 66 was detached and we followed it fairly sedately back to Margam, before a spirited run back to Cardiff Central, only slowing down to traverse the Leckwith Loop. From here we took the flyover at Bishton/Llanwern and headed north via Chepstow and Gloucester whilst reflecting back upon our crazy night previous. We left the tour at Cheltenham (the 37's making yet another splendid start from the station), and headed for the pub to await our train to back to London.

Distances, in miles and chains (M & C), are taken from the timing sheet given out on the train whilst those after Derby on the return have been calculated by Richard Hughes. No attempt has been made to verify any of the mileages given.